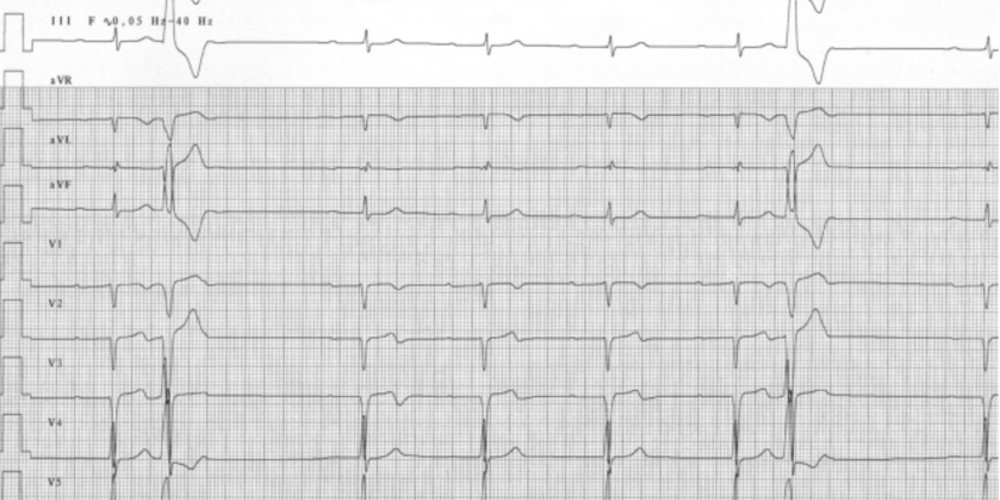 The association of conduction disorder (first degree AV block) and ventricular irritability in this young patient should evoke the diagnosis of laminopathy which was confirmed by genetic testing. The group of laminopathies encompasses a heterogeneous ensemble of diseases in conjunction with the mutation of a gene encoding laminins A and C, ubiquitously-expressed nuclear membrane proteins. The phenotypes are variable with a more or less marked tropism within the same family for muscle, nerve and adipose tissues. Cardiac involvement is frequent with evidence of supraventricular rhythm disturbances, conduction disorders and dilated cardiomyopathies isolated or associated with peripheral muscle damage. Heart disease affects the prognosis, with a very high risk of sudden rhythmic death in young adults (higher than the risk observed for other inherited forms of dilated heart disease).

Despite of a wide interindividual variability, it is possible to define a more or less typical sequence: around the age of 20 to 30 years, in the absence of measurable left ventricular dysfunction, it is common to observe supraventricular rhythm disturbances (atrial fibrillation, atrial flutter) with high thromboembolic risk and conduction disorders (most often, as in this patient, a first degree AV block). The evolution of the disease is marked by a progression of left ventricular dysfunction, which can lead to end-stage heart failure (often around the age of 50 years), an increase in conduction disorders (frequent complete atrioventricular blocks after the age of 30) and a risk of sudden death by significantly increased ventricular rhythm disturbances. While implantation of a pacemaker does not protect against the occurrence of sudden death associated with severe ventricular rhythm disturbances, the indications for defibrillator therapy should be broad.

The typical electrocardiogram of laminopathy thus varies according to the evolution of the disease. The electrocardiogram of this patient (P wave of small amplitude, prolonged PR interval and normal QRS duration) is characteristic of that classically observed in young patients (between 20 and 30 years of age). After age 40, the electrocardiogram most often shows an atrial fibrillation and ventricular pacing (implantation in the context of a complete atrioventricular block).

Epigraph
In a patient with dilated cardiomyopathy, various elements should lead to the diagnosis of laminopathy: 1) a familial context of neuromuscular disease, conduction disorder, sudden death or dilated cardiomyopathy; 2) peripheral muscle damage; 3) the occurrence in a young patient of supraventricular rhythm disturbances or conductive disorders (mainly first degree AV block). A genetic confirmation is hence essential and the systematic indication of defibrillator implantation should be discussed, given the major risk of sudden death. 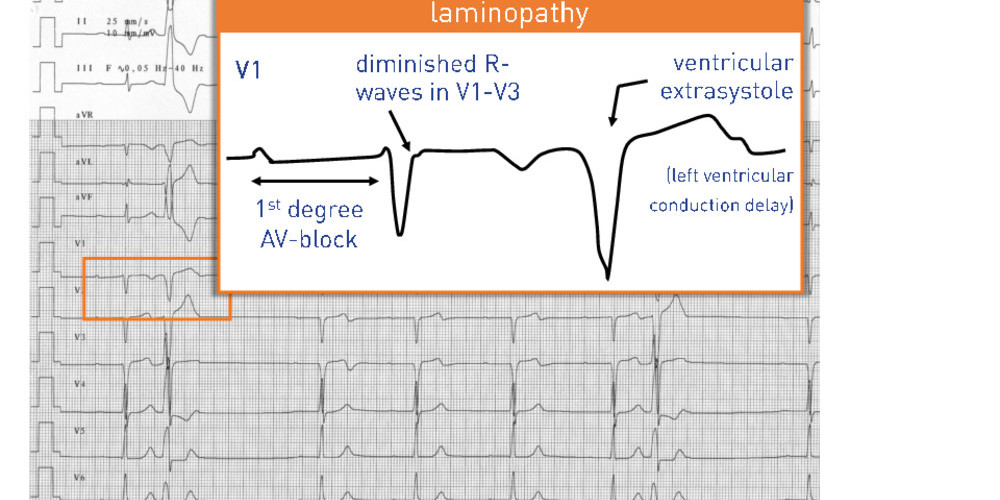