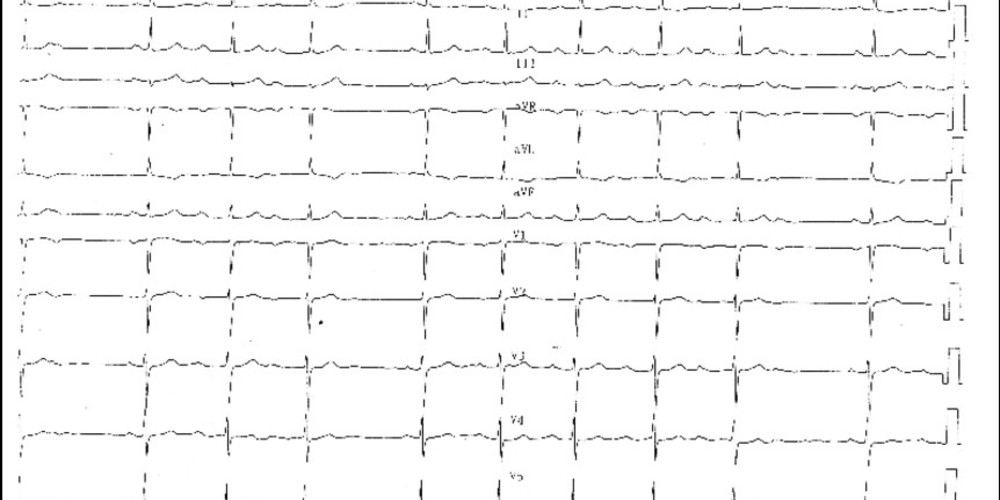 Second-degree atrioventricular block (AV block) type 1 (Mobitz 1) is defined by the intermittent presence of a blocked P wave with a variable PR interval. The second-degree AV block with Wenckebach periodicity is a special form of second-degree AV block type 1; in this setting, we can observe a progressive prolongation of the PR interval until the occurrence of a blocked P wave; after the pause, the next P wave is conducted with a PR interval returning to the baseline value after which the same sequence is reproduced (Wenckebach periods). These periods may be of variable length, comprising between 2 to 10 conducted P waves for one blocked P wave. The increment in PR interval is often more significant at the onset of the Wenckebach cycle and tends to decrease from cycle to cycle. For example, a PR interval of 150 ms can be measured on the first cycle and then prolonged to 250 ms on the second (+100 ms), 300 ms on the next (+50 ms), and finally to 330 ms (+30 ms) before the P wave is blocked. The PP cycles being of stable length, a shortening of the RR intervals is thus observed before occurrence of the pause.

When the heart rate increases, in the absence of concomitant adrenergic stimulation (e.g. atrial pacing at increasing rate), the nodal conduction velocities lengthen hence resulting in a progressive increase in PR interval. Conversely, if the increase in rate occurs in conjunction with exercise or stress, the decremental conduction is compensated by the shortening of the catecholamine-induced refractory periods (resulting in an unmodified or shortened PR). When the PR is prolonged with a constant atrial rate (as on this tracing), the P wave gradually approaches the previous QRS, the PR interval becomes increasingly shorter and as a result, this decremental conduction incurs an increase in the prolongation of the PR interval which maintains the phenomenon and leads to the occurrence of a blocked P wave.

The second-degree AV block type 1 corresponds in a majority of instances to a conduction disorder at the level of the atrioventricular node and to an exaggeration of decremental conduction. This location explains the predominantly normal morphology of the QRS complexes. During an electrophysiological study, a slowing of nodal conduction results in a progressive prolongation of the AH interval, the HV interval being normal and the blocked P wave not followed by a His potential.

In this asymptomatic patient, a former athlete, an exercise test showed a resumption of normal atrioventricular synchronism (absence of blocked P waves, prolonged PR then shortening upon exertion). The narrow QRS complexes are evocative of an intra-nodal disorder with a low risk of development toward a third-degree atrioventricular block. This patient remained asymptomatic in the absence of pacemaker implantation.

Epigraph
A second-degree AV block type 1 with Wenckebach periodicity corresponds to a progressive prolongation of the PR interval until the occurrence of a blocked P wave. The phenomenon recurs in periods of varying lengths. 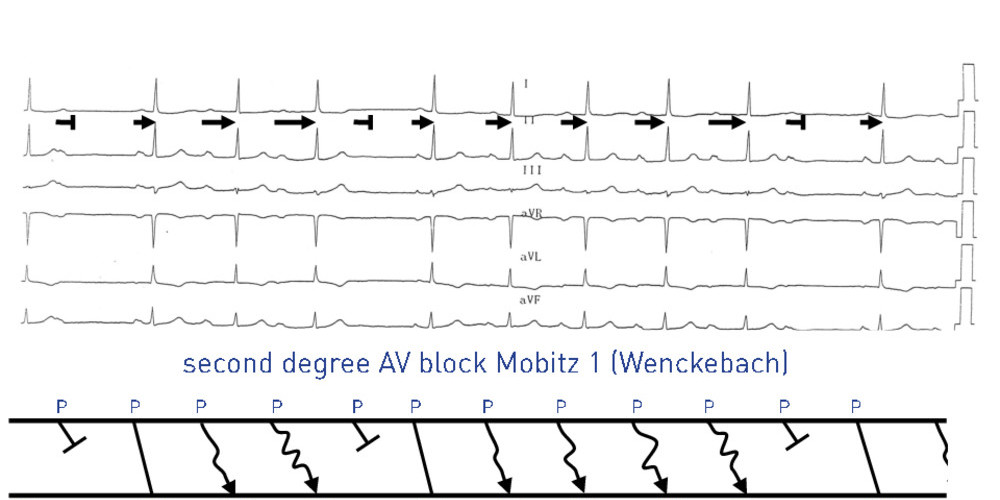