The implantation of a cardiac defibrillator (ICD) usually ends with the induction of ventricular fibrillation (VF) to verify that the device properly detects and terminates the arrhythmia. Despite some risk involved, this test used to be performed systematically with older devices, which were implanted for secondary prevention indications, in patients at high risk of recurrent sudden cardiac death. Shocks were the only therapy available and defibrillation failures were relatively frequent. With contemporary devices, defibrillation failures are rare, most patients undergo device implantation for primary prevention indications, and anti-tachycardia pacing terminates a large proportion of rapid ventricular tachycardias. Furthermore, newer ICDs deliver shocks of considerably higher maximum energy, guaranteeing a wider safety margin. Consequently, whether to induce VF at the end of an implantation procedure is a decision made on a case-by-case basis. 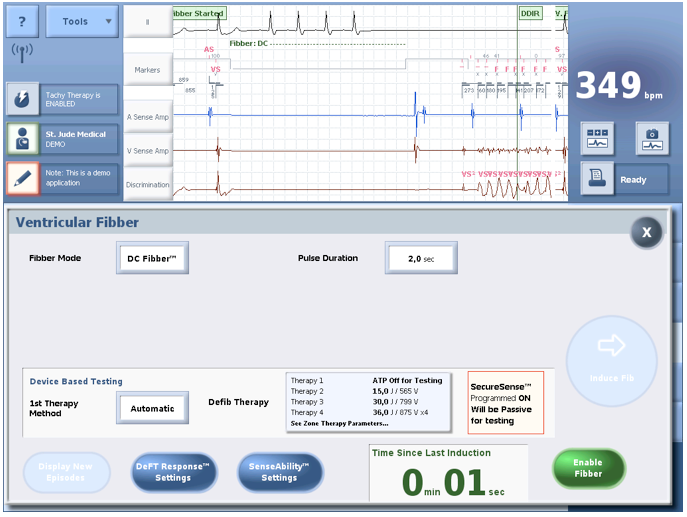 A shock is delivered on the T wave, i.e. in the vulnerable period; the right ventricle is paced at a fixed rate until a 1 - 2 J shock is delivered on the peak of the T wave, at a coupling interval of approximately 300 ms. The number of pulses is programmable between 2 and 25, the cycle length between 100 and 800 ms, the pacing amplitude at 5 or 7.5 V, the coupling of the electrical shock between 20 and 600 ms, and the energy delivered between 0.1 and 36 J; 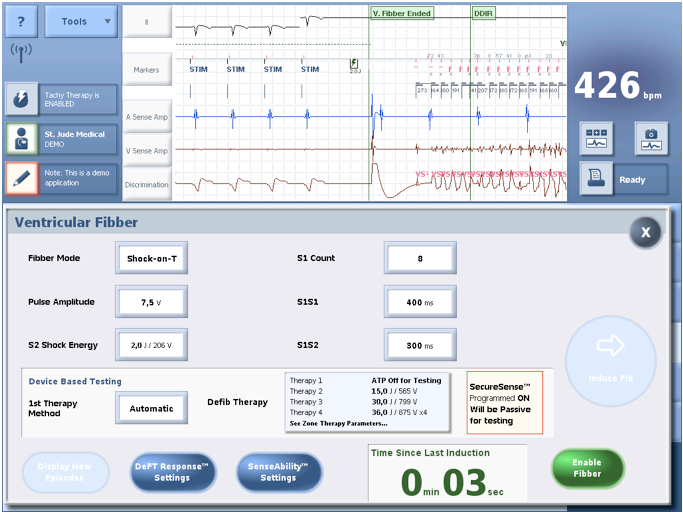 This fibber mode delivers bursts of stimuli at short cycle lengths with no extra stimuli. Bursts can be delivered for an extended time by holding the Hold to Apply Burst button. 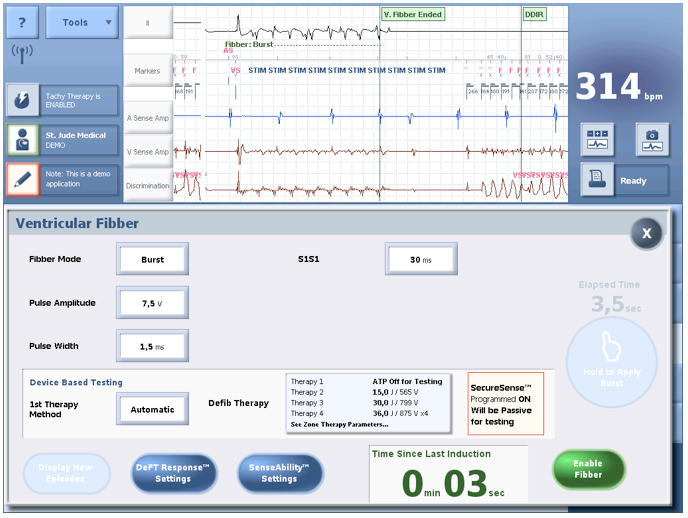 The success rate, i.e. the ratio VF induction / attempt, seems higher (>90%) with the delivery of continuous or alternating current than with the delivery of shocks on the T wave (approximately 80%). Furthermore, the arrhythmias triggered with continuous current seem more polymorphous than when triggered by T wave shocks. If the procedure is performed under local anaesthesia, the painless alternating current is preferred to the other induction methods.

2 - DELEVERY OF THE ELECTRICAL SHOCK

During the induction procedure, the electrical shock can be delivered by 3 different methods: