The reliable function of a defibrillator mandates a flawless detection of the rapid, low-amplitude signals associated with ventricular fibrillation (VF), while rejecting the cardiac signals besides the QRS as well as all extra-cardiac signals. This implies the programming of a high sensitivity and short refractory periods. Unlike in cardiac pacemakers, the sensing threshold, instead of being a fixed programmed value, is automatically adapted to the amplitude of the preceding R wave. Thereafter, the sensitivity increases throughout the cardiac cycle, in search of a low-amplitude signal.

This chapter describes the RV detection function, which is key in the detection and treatment of ventricular arrhythmias. Before their measurement, the signals are filtered according to their frequencies. The latest generation of Boston Scientific defibrillators use a bandwidth between 20 and 85 Hz (the frequency of a T wave is typically between 0 and 10 Hz). The electrical signal is converted to a numerical value by a 12-bit converter.

To optimize the sensing of the rapid and irregular signals associated with VF, the device adjusts the ventricular sensitivity according to a slow or fast AGC. The AGC applies a “slow” component to set an interval in search of the next QRS amplitude. By calculating an “average” of the peaks of the preceding signals, the “slow” component defines a zone that is likely to contain the following peak, and sets this zone between a minimum and a maximum value.

The “rapid” component of the AGC maintains a high sensitivity value after sensing a ventricular event, before gradually decrementing the sensitivity setting in order to increase the device’s sensitivity.

At the end of the refractory period + 15 ms, the sensitivity setting decreases to 75% of the sensed peak or, if the last ventricular event is paced, to 75% of the average peak. Importantly, full R-wave range is available up to 32 mV.

If the last ventricular event is paced, the AGC decreases the setting to 7/8 of the preceding value with each following step, though the step duration is determined by the minimum pacing rate: the Min value (or the programmed sensitivity setting) is reached 150 ms before the next programmed paced event. 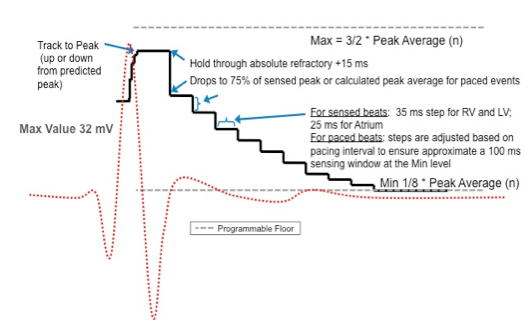 The choice of heart rate zones determining the interventions by a defibrillator is a critical step in its programming. State-of-the-art defibrillators enable the programming of several zones of arrhythmias detection based on the measured RR intervals. Each zone is associated with a specific programming of tachycardias discrimination and therapies. The number of zones and the range of programmed heart rates must be adapted to the characteristics, history and device implantation indication of each patient. In a Boston Scientific defibrillator, 1, 2 or 3 detection zones can be programmed. 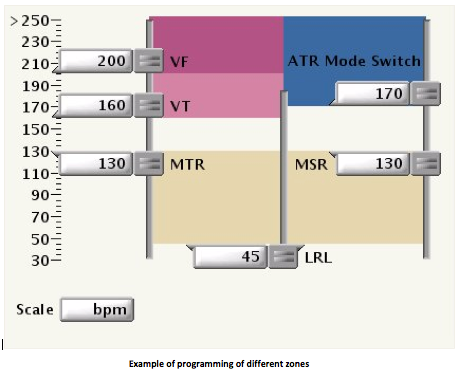 The thresholds of adjacent zones of heart rates must differ by at least 20 bpm.

In double or triple chamber defibrillators, the rate threshold of ventricular tachycardia (VT) must be ≥5 bpm faster than the maximum tracking rate (MTR) and the maximum sensor rate (MSR).

In a single chamber defibrillator, the rate threshold of VT must be ≥15 bpm faster than the lower rate limit (LRL).

Secondary prevention : in a patient suffering from heart failure, the rate zones are programmed according to the cycle of the VT that prompted the device implantation. The lower boundary of a VT zone is usually programmed 20 bpm slower than the clinical VT, as the introduction or intensification of antiarrhythmic therapy after the implant might slow the VT rate.

Primary prevention : in patients suffering from heart failure, the likelihood of developing VT after implantation of the device is high, probably justifying the programming of 2 zones of VT detection and treatment, besides the programming of the VF zone. The main justification for the programming of 2 separate zones of VT is the ability to treat specifically very rapid tachycardias by favoring painless antitachycardia pacing (ATP) instead of the delivery of electrical shocks. This was confirmed in the PAIN FREE I and PAIN FREE II clinical studies, where 3 out of 4 shocks were prevented by ATP in the fast VT zone, without significantly increasing the incidence of adverse events, though significantly improving the quality of life.

In a patient presenting with complete atrioventricular block : the risk of inappropriate therapy due to a supraventricular tachycardia with 1:1 atrioventricular conduction is inexistent, enabling the setting of interventions by the device at relatively slow heart rates without jeopardizing its specificity. In these patients, these discrimination algorithms are unnecessary since all spontaneous tachycardias are ventricular in origin.

In a young and physically active patient : the risk of inappropriate therapy prompted by a physiologic acceleration of the heart rate or by atrial fibrillation with rapid atrioventricular conduction must be included in the decision to program several intervention zones, while limiting the likelihood of overlap between the defibrillator’s intervention rates and the patient’s physiologic rates.

In a patient presenting with Brugada syndrome : the risk of organized VT is extremely low, while the risk of atrial fibrillation is high. Consequently, the programming of a zone of VT detection and treatment, besides a VF zone, is probably not only unnecessary but also risky. The programming of a supplemental zone of monitoring only allows the recording of possible tachyarrhythmias at lower rates and an adaptation of the programming. A single, relatively high VF zone (>220 bpm) is usually programmed with a low boundary.

4 - DETECTION OF AN EPISODE OF VENTRICULAR ARRHYTHMIA

To initiate the recording of an arrhythmia, 3 consecutive cycles must fall inside one of the zones of tachycardia. The device then uses a sliding window, where it looks for the occurrence of 8 out of 10 rapid consecutive cycles. The first 3 cycles are integrated in this window. Upon satisfaction of this criterion, a “V-Epsd” marker appears on the tracing, which marks the onset of the recording. 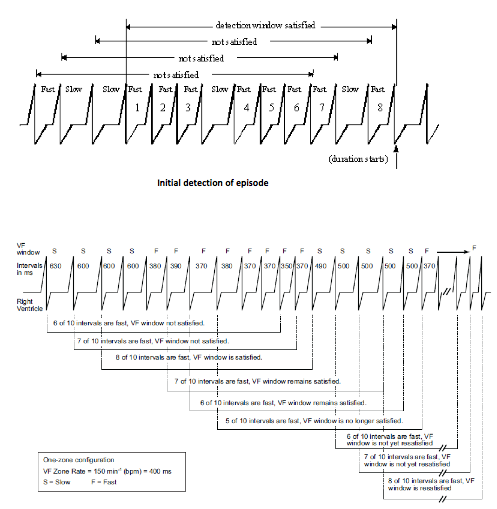 If several detection zones are programmed, each zone has its own detection window. A cycle falling in a faster zone (VF for VT for example) increments the counter of its zone (VF) as well as of the slower zone (VT and VT-1). When the 8 out of 10 short cycles criterion is fulfilled for one of the zones, the criterion of initial detection is fulfilled. 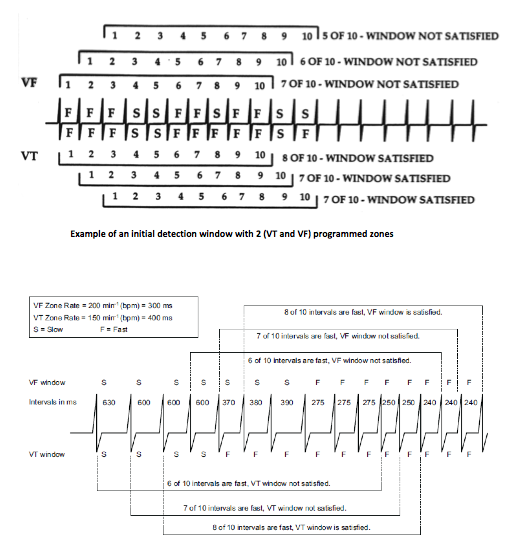 An episode is considered sustained if a proportion of ≥6 out of 10 short cycles is maintained throughout its duration. If, up to the end, a ≥6 out of 10 cycles ratio has persisted, the episode is classified as VT, supraventricular tachycardia or VF. When the Duration timer expires, the last ventricular interval is analyzed to determine whether the tachyarrhythmia remained stable, slowed or accelerated. If the length of this last cycle is in the zone of the arrhythmic Duration that just expired, detection is met and the therapy(ies) can be delivered.

If the length of the last interval is not in the zone of the arrhythmic Duration that just expired, the analysis continues until:

The end of an episode is declared after a Duration during which the 8 out of 10 criterion of redetection is not fulfilled: