Same patient as in the previous tracing; other episode diagnosed as PMT and recorded in the device memory. 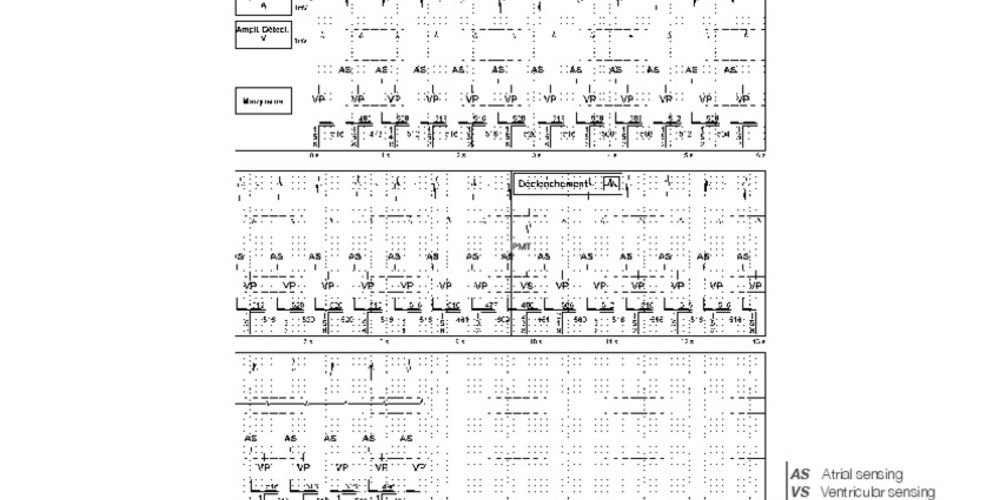 At the beginning of tracing, AS-VP cycles with varying AS-AS and VP-AS intervals of more than 40 ms between cycles (480 to 520 ms); stabilization of these intervals in a second phase; suspicion of PMT (atrial rate above the PMT rate limit and stable VP-AS intervals); shortening of the AV delay for one cycle (from 150 to 100 ms); on the next cycle, shortening of the VP-AS interval highly suggestive of a PMT; the ensuing atrial activity does not trigger an AV delay; intrinsic atrioventricular conduction highly suggestive of sinus tachycardia; this VS cycle inhibits atrial pacing; on the ensuing cycle, the AS-AS cycle remains relatively short which demonstrates the presence of a sinus tachycardia wrongly diagnosed as PMT by the device. 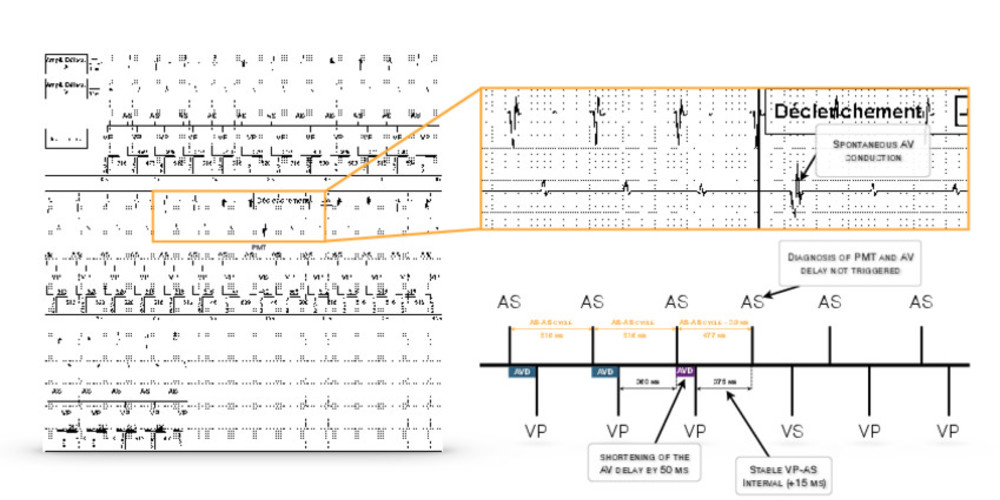 The PMT diagnosis and termination algorithm varies according to the different manufacturers, but is based on the multi-cycle repetition of atrial sensing and ventricular pacing displaying a high rate and a fixed VP-AS coupling. The PMT detection algorithm requires 8 (AbbottTM pacemakers, BiotronikTM, LivanovaTM and MedtronicTM) or 16 (Boston ScientificTM) consecutive VP-AS cycles. The detection algorithm requires that the PMT be at the maximum monitoring rate (Boston ScientificTM pacemakers), that the rate be greater than 100 bpm (BiotronikTM pacemakers) or that the intervals are less than 470 ms (LivanovaTM pacemakers). This parameter is programmable on AbbottTM pacemakers. A stability criterion for VP-AS intervals is included in the AbbottTM, BiotronikTM, Boston ScientificTM and LivanovaTM pacemaker algorithm. The algorithm includes a confirmation phase with AV delay modification for AbbottTM, BiotronikTM, LivanovaTM pacemakers and the latest MedtronicTM pacemaker models. This confirmation phase changes the AV delay to effectively differentiate sinus tachycardia and PMT as explained on the previous tracing. A few isolated cases of misclassification during an episode of sinus tachycardia have been described. The occurrence of a premature atrial contraction following a shortening of the AV delay may skew the diagnosis giving the impression that the change in AV delay has had an impact on the ensuing VP-AS delay (prematurity of the atrial extrasystole). In this example, the pacemaker shortens the AV delay for one cycle upon suspicion of a PMT. The following VP-AS interval is obviously shorter than the previous interval (+16 ms) leading to the diagnosis of PMT. This shortening is not related to the change in AV delay but to a variation of the AS-AS intervals found at the beginning of the tracing. The ensuing AS-AS cycle remains at a value close to 480 ms, which is highly suggestive of sinus tachycardia, just as the fact that the AS cycle, which did not trigger an AV delay, is followed by an intrinsic QRS complex (VS). Throughout the tracing, we can observe variations in AS-AS cycle interval most likely of respiratory origin.

The PMT diagnosis and termination algorithm includes a confirmation phase allowing the differential diagnosis between PMT and sinus tachycardia and thereby avoiding untimely interventions due to sinus tachycardia. In rare cases (premature atrial contraction, respiratory variability of atrial sensing), the algorithm may be misled resulting in an atrial activity not followed by ventricular pacing. 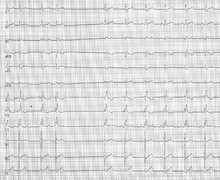 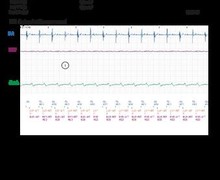 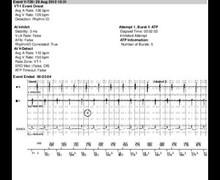 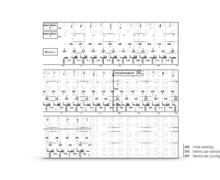 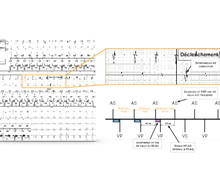