Induction of VF by T-wave shock

This 80-year-old man underwent implantation of a Boston Science Teligen dual chamber defibrillator for secondary prevention after an episode of VT causing syncope, in the context of severe ischemic cardiomyopathy and a 20% LVEF. A lead was implanted at the RV apex and another in the right atrium; VF was induced at end of the procedure under general anesthesia; the device was programmed specifically for this type of procedure, with a ventricular sensitivity set at 1.0 mV, a single detection zone (VF at 200 bpm), no discrimination, and a first shock at 31 J followed by 7 shocks at the maximum amplitude of 41 J. 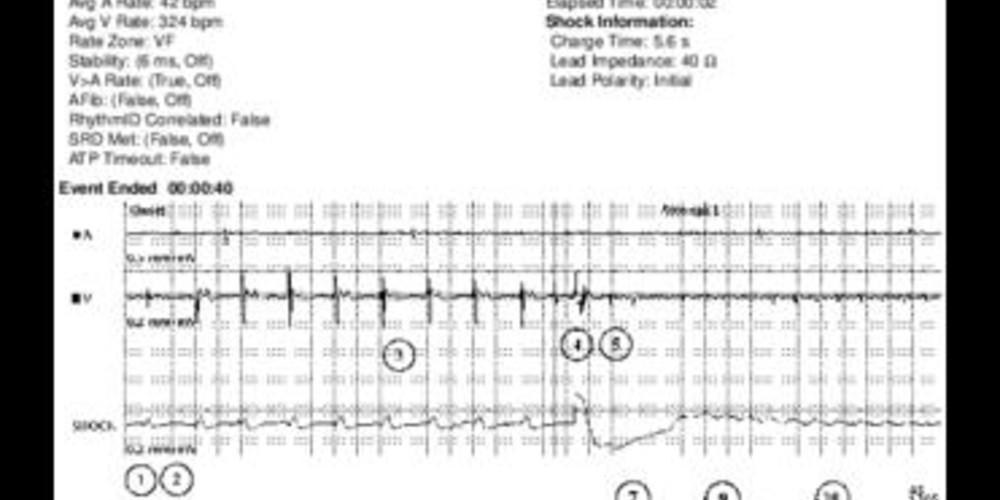 For dual or triple chamber defibrillators, 3 channels are available in nominal: 1) the bipolar atrial (A) sensing channel, 2) the bipolar ventricular (V) sensing channel, and 3) the high-voltage (shock) channel between the distal coil and the pulse generator. This latter channel yields a morphology relatively similar to that of an electrocardiographic lead. Markers and time intervals are also available.

The calibration available on the tracing measures the amplitude of the various signals. On this tracing, the 0.5-mm/mV calibration was identical on the 3 channels. It is automatically set by the device (auto-calibration), though can be reprogrammed by the programmer to simplify the analysis of an episode.

The recording of the EGM of an episode begins 5 seconds before the shock delivery on the T wave.

The induction of VF at the end of an implant procedure has 3 main objectives: 1) verify the integrity of the defibrillation circuit and connection(s) between lead(s) and pulse generator, 2) confirm a reliable detection of VF by the device, a step that is a) critical for the proper function of the device, and b) imperfectly confirmed by measurements of the R wave during sinus rhythm, 3) verify successful termination of VF by a shock delivered by the device.

In this patient, VF was induced by a shock delivered on the T wave. The arrhythmia was accurately detected despite the programming of a 1.0-mV sensitivity. We observed a short period of ventricular undersensing at the beginning of the capacitors’ charge, which seemed acceptable and associated with a sufficient safety margin with respect to the long-term programming of 0.6 mV. The induction of VF was repeated a second time 5 minutes after this episode. The sensing was correct and the 31 J shock was efficient. Therefore, the first electrical shock of 31 J terminated the ventricular arrhythmia twice, guaranteeing a sufficient safety margin with respect to the maximum 41 J output of the device. The 40-Ohm shock impedance was satisfactory for a single coil lead and suggested that the high-voltage circuit was intact.

The ventricular Tachy mode was on “Monitor + Therapy”, meaning that the entire range of detection and treatment options had been activated.

The summary indicates that this episode corresponded to an arrhythmia induced at the end of the implantation procedure and was classified in the VF zone.

Onset of VF event: the ventricular rate (314 bpm) is the average of 4 cycles preceding the V-Epsd marker; the atrial rate is non-recorded (NR) because of the sensing of an insufficient number of atrial EGM during that period; rate only indicates that, at the onset of the event, heart rate was analyzed without additional discrimination.

During Detect-V, the atrial (42 bpm) and the ventricular (314 bpm) rates were calculated by averaging the 4 cycles preceding the V-Detect marker. The episode was always detected in the VF zone. In that zone, no other discriminator is used besides rate. However, various parameters are analyzed, including stability, V>A rate, A Fib, correlated Rhythm ID even if they do not interfere with the decision to treat the episode. Neither the Sustained Rate Duration nor the ATP limit intervened in the VF zone.

31 J V shock attempt: the first programmed and delivered therapy in the VF zone was a 31 J shock. The charge duration of the biphasic shock waveform was 5.6 sec, with a lead impedance of 40 Ohms. The initial, nominal lead polarity corresponded to a cathodal shock (on a single coil lead, the RV coil was the cathode and the pulse generator the anode for the first phase, and inversely for the second phase). 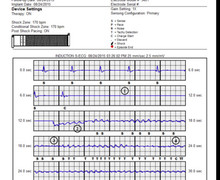 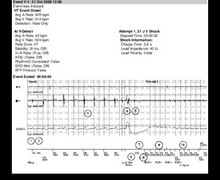