Defibrillation was historically conceived to terminate life-threatening ventricular tachyarrhythmias with an electrical shock. Cardioversion, which consists of delivering a low-energy shock synchronized to the upstroke of the R wave of an EGM, is distinguished from defibrillation, which consists of delivering a non-synchronized, high-energy shock. In the VF zone, synchronization of the shock may not be possible because of instability of the ventricular electrograms. In practice, a Boston Science defibrillator systematically attempts to synchronize the shock to an R wave, including in the VF zone.

The effects of an electrical shock vary as a function of the energy delivered. Weak energies, on the order of 1 J, delivered in the vulnerable period may induce an arrhythmia. The upper limit of vulnerability, a value correlated with the defibrillation threshold, is the lowest energy delivered in the ventricular vulnerable period that does not trigger VF. The probability of arrhythmia termination increases thereafter along an exponential curve as a function of the amplitude of the shock delivered, when synchronized with the R wave. Past a certain value, the risk of re-inducing an arrhythmia increases as well, thereby limiting the chances of therapeutic success. A shock of excessive amplitude may injure the myocardium.

The stored energy subsequently delivered by a defibrillator is expressed by the formula:

where C = capacitance and V = voltage;

The delivered energy can be increased by increasing either the capacitance or the voltage.

Various characteristics of the shock waveform, shock vector, shock amplitude and number of shocks delivered determine the success of defibrillation and may or may not be programmable.

Shock waveform : Initially monophasic, the shock waveform of state-of-the-art defibrillators is now biphasic, lowering the defibrillation threshold. In a biphasic shock, the current is initially delivered in one direction, then, after a fixed amount of energy has been delivered, the current direction is reversed. The first phase of a biphasic shock is equivalent to that of a monophasic shock with a lesser critical mass. The second phase returns the membrane potential as close as possible to zero to prevent the re-induction of a tachycardia or of VF. The shock waveform is necessarily biphasic and is not programmable with the latest Boston Science defibrillators.

The following programmable configurations are available with a double-coil lead:

RV to can is the only working single-coil lead configuration. The 2 others, albeit programmable, should not be used. With the RV to right atrial coils configuration, no shock would be delivered. Therefore, this vector should never be used with a single-coil lead. When programmed, an alert screen appears that asks for verification that the lead is indeed a double coil. 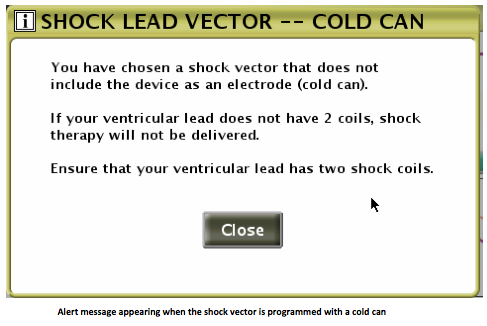 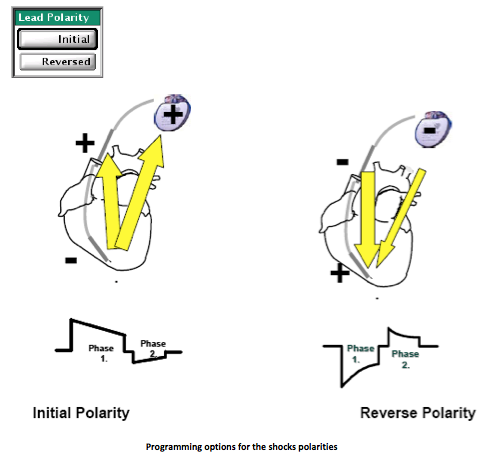 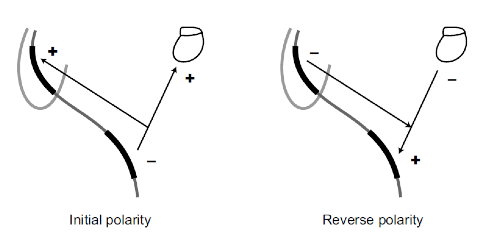 The selection of the shock pertains to all the shocks delivered by the device. In case of prior unsuccessful shocks in a zone, the last shock of that zone is automatically delivered with the reversed polarity from the preceding shock (initial or reversed)

For a double-coil lead, 6 choices of configurations are therefore available by changing the polarity and the shock vector. 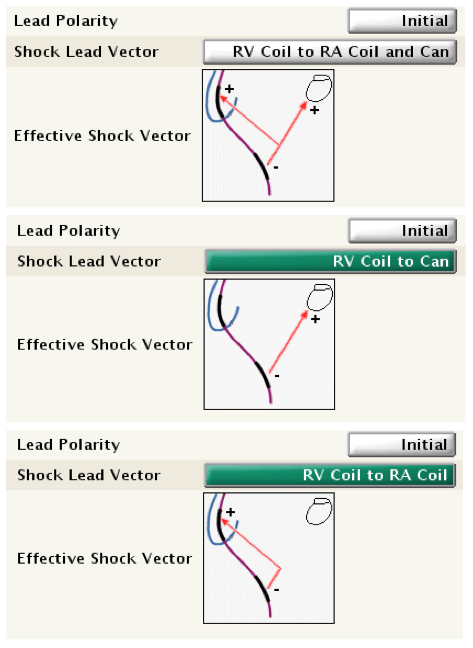 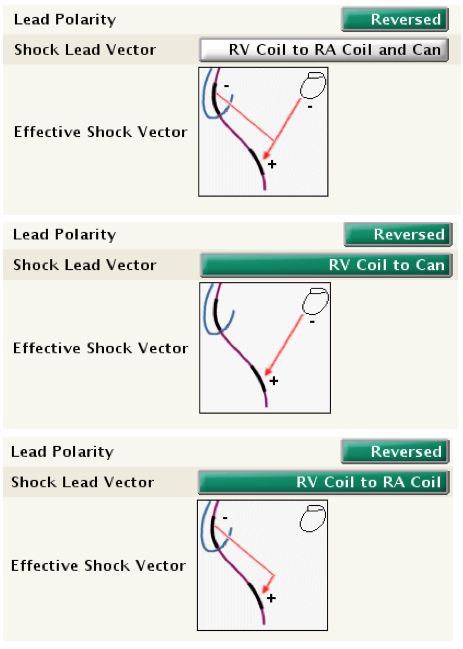 Tilt : the tilt of the Boston Scientific defibrillators is a non-programmable. The first phase is truncated when the initial leading edge voltage has decreased by 60% (leaving a residual voltage of 100% - 60% = 40%). The second phase is truncated when the leading edge voltage (corresponding to the 40% residual voltage) has decreased by 50% (40/2 = 20%). 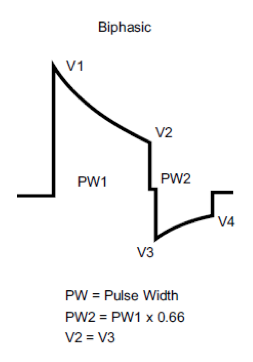 Shock amplitude : the energy delivered is usually about 14% lower than the stored energy. The first two shocks in each ventricular zone can be programmed between 0.1 and 41 J in order to optimize the charge time, the pulse generator’s life expectancy and the safety margins. The energy of the second shock must be the same or higher lower than that of the first. The energy of the remaining shocks in each zone is fixed at a maximum of 41 J. In the VF zone, however, the amplitude of the first and following shocks is usually set at the maximum capability of the device. The programming of the defibrillation shocks strength can be guided by the defibrillation threshold, defined as the lowest energy that converts VF to sinus rhythm. It is impossible to not program shocks in the VF zone.

In the VT zone, programming of the first shock amplitude may be empirically low (between 5 and 10 J), which saves the battery and may mitigate the discomfort experienced by the patient, or high, with a view to increase the shock efficacy and the chances to terminate the arrhythmia. In the VT zone, the shocks can also be de-programmed, leaving the zone a) as a monitor (no therapy delivered), or b) limited to deliver bursts of ATP.

Number of shocks : the maximum number of consecutive shocks that can be delivered in the VF zone is fixed at 8, thereby limiting the risk of an endless series of inappropriate shocks. In the VT zone, the number is limited to 6 and in the VT-1 zone to 5 shocks.

Shock confirmation :ventricular shock therapy can be programmed to be non-committed or committed. The objective of a re-confirmation is to not deliver an unnecessary shock in case of spontaneous termination of the arrhythmia. The device monitors the tachyarrhythmias during and immediately after the charge of the capacitors. During that phase, it examines whether the tachyarrhythmia has spontaneously ended, and determines whether a shock is needed.

If the Committed Shock feature is programmed ON, the shock is systematically delivered synchronously with the first sensed R-wave following a 500-ms delay after the capacitors are charged whether the arrhythmia is sustained or not. The 500-ms delay allows a minimum reaction time for a divert command to be issued from the programmer (the operator is able to cancel the shock delivery with the programmer). A forced 135-ms refractory period elapses at the end of the charge, and events occurring during the first 135 ms of the 500-ms delay are ignored. If no R wave is sensed during the 2 sec following the end of the charge, the shock is delivered asynchronously at the end of the 2 sec delay.

If the Committed Shock feature is programmed OFF, at the end of the charge, a reconfirmation phase takes place, when the device determines whether the arrhythmia has ended (no shock delivered) or not (shock delivered) as follows:

A shock is followed by a non-programmable 500-ms refractory period.

A priority of defibrillator programming is to minimize the delivery of shocks without compromising the patient’s safety. One must adopt the least aggressive and least painful treatment modality to terminate an arrhythmia. The principle behind ATP is to capture the arrhythmia and interrupt an organized VT by penetrating its propagation circuit across the ventricles. The ventricle must, consequently, be paced at a faster rate than that of the tachycardia. ATP is painless, lowers the energy consumption and spares the batteries. It must, therefore, be favored as first-line treatment of organized ventricular rhythm disturbances, even when rapid. The efficacy of this type of therapies has been confirmed in a wide range of VT rates, up to 240 bpm. It is therefore customary, nowadays, to program a burst of ATP in the VF zone, unless it has been found ineffective or arrhythmogenic.

Several settings must be programmed to optimize the efficacy of this type of therapy: 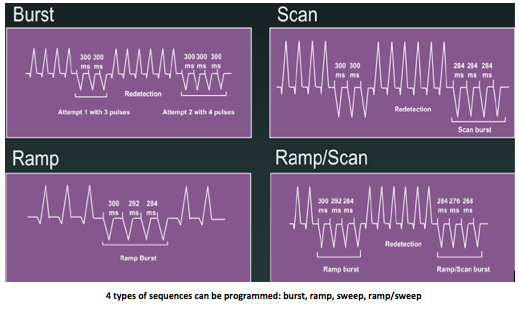 The cycle length of a single burst of ATP is fixed (no change from a cycle to the next). It is the most commonly used and probably least aggressive type of sequence in clinical practice. Within a ramp, the cycle length is shortened from cycle to cycle by a programmable decremental value. 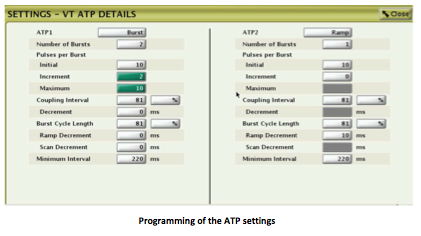 The number of programmed sequences varies as a function of the rate of the tachycardia. In a slow VT zone, a large number of sequences can be programmed in order to delay to a maximum the shock delivery for a tachycardia that does not threaten the patient’s short-term survival. It is, in fact, possible to not program an electrical shock for that slow VT zone (VT-1). For tachycardias between 150 and 200 bpm, it is usual to program 3 to 6 consecutive sequences of ATP. For the fastest VT, one or two sequences are programmed, since a risk exists of a) not ending the episode and b) delaying the shock delivery for a tachycardia that compromises the hemodynamic status and the patient’s prognosis. 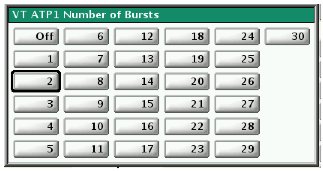 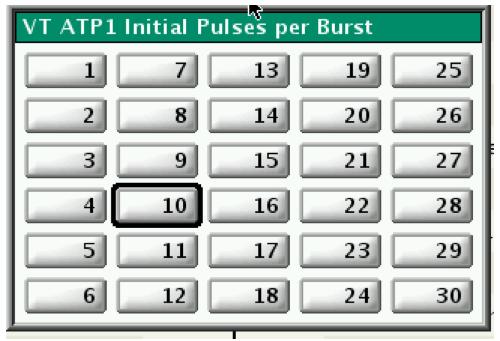 Programming of the number of stimuli per burst (nominal value = 10)

An additional pacing stimulus may be systematically added from one sequence to the other.

The coupling cycle (delay between the last sensed and first paced ventricular event) and the pacing cycle (delay between first and the second pacing stimulus) can be programmed differently. The shorter the coupling interval, the more aggressive the therapy and the greater the risk of tachycardia acceleration. Both coupling intervals can be programmed as percentages or as fixed cycles (in ms). It seems more sensible to program in percentages in order to adapt them to the rate of the tachycardia and its variations. The percentage is calculated from the average of the 4 cycles preceding the therapy.

Programming of a fixed (ms) versus adaptive (%) coupling interval 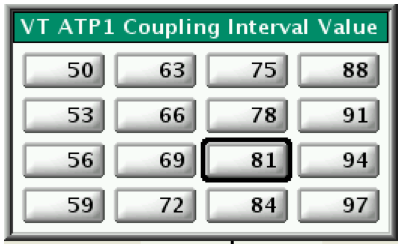 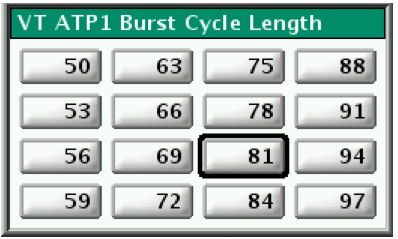 A rate limit can be programmed beyond which, regardless of the programming, the device will not pace. If, during a ramp, for example, the minimum interval has been reached, the following cycles will be paced at that minimum coupling cycle length without further decrement. 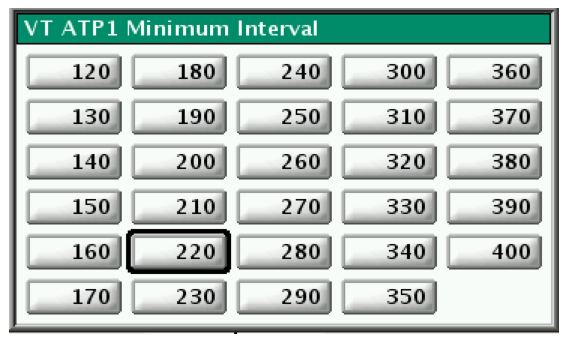 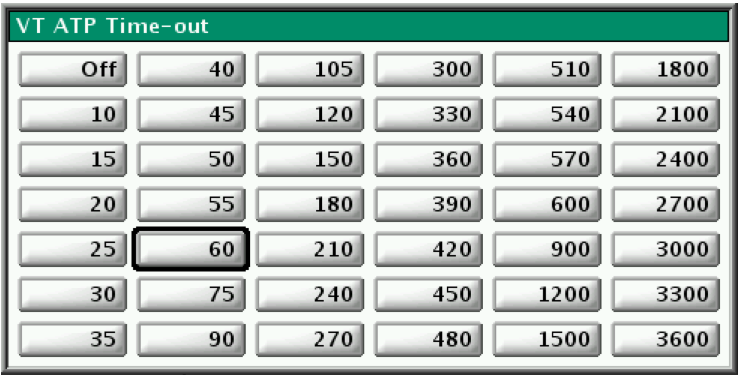 The chances of reliable ventricular capture can be increased by programming the amplitude and duration of the ATP pulses independently (nominal value = 5 V/1.0 ms).

From an initially empiric programming, the pulses are subsequently adapted according to:

- the various arrhythmias recorded by the device and analyzed during the patient’s follow-up,

- the efficacy (termination of the episode) / adverse effect (acceleration of the arrhythmia) ratio of a type of pacing sequence.

ATP has proven its efficacy in the termination of even fast ventricular tachyarrhythmias. With the most recent devices, a burst of ATP can be programmed in the VF zone, using the Quick Convert function. The characteristics of Quick Convert are not programmable:

The ventricular rate must be <250 bpm (based on an average of the 4 preceding cycles) for a burst to be delivered. The burst is only used as a first attempt at treatment of an episode. Once the burst has been delivered, the device analyses the rhythm: if the arrhythmia persists, the capacitors begin to charge; if the arrhythmia has ended, the charge is withheld.

The device applies the following criteria to examine the efficacy of the burst:

After an unsuccessful burst, the charge onset marker appears on the tracing 300 ms after the charge has effectively started. The charge begins on the second fast cycle, though the marker may sometimes not be visible before the third.

Quick Convert enables the painless termination of a considerable proportion of organized VT episodes detected in the VF zone. This algorithm also prevents the charge of the capacitors, preventing thereby a premature depletion of the batteries. However, if the burst is unsuccessful, the charge of the capacitors is delayed by 1.5 to 2.5 sec compared to the usual function (shock as first-line therapy in the VF zone). 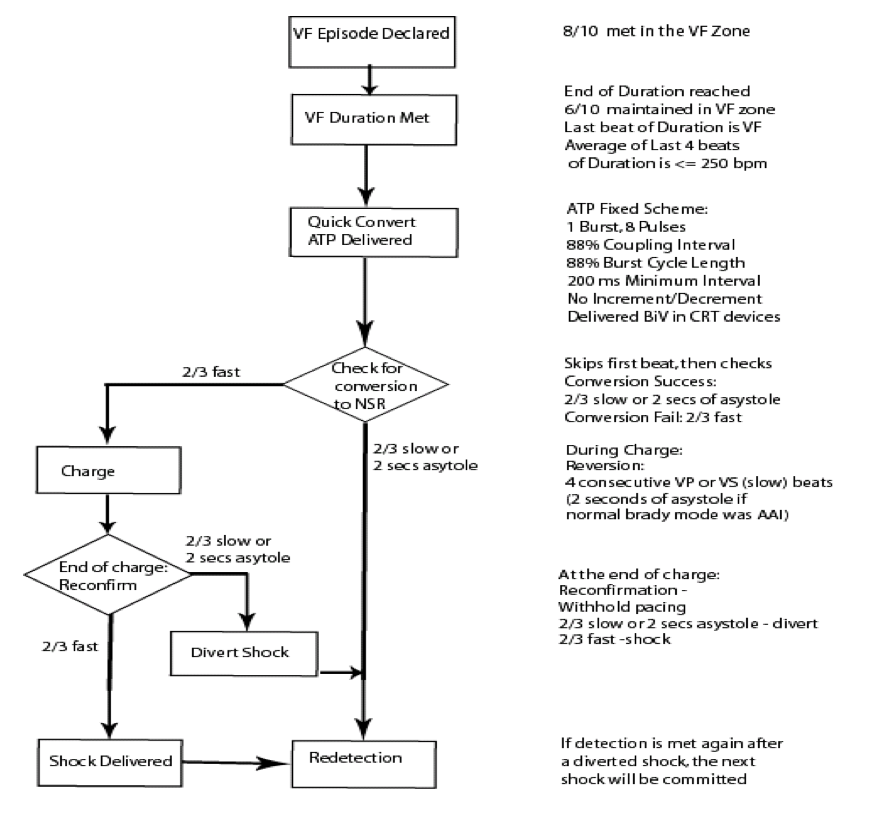 Programming of the Quick Convert algorithm