A 47-year-old man presenting with ischemic cardiomyopathy, old anterior myocardial infarction, a 35% LVEF and an episode of sustained VT, was placed on a regimen of amiodarone and underwent implantation of an Atlas single chamber ICD and VF induction procedure. 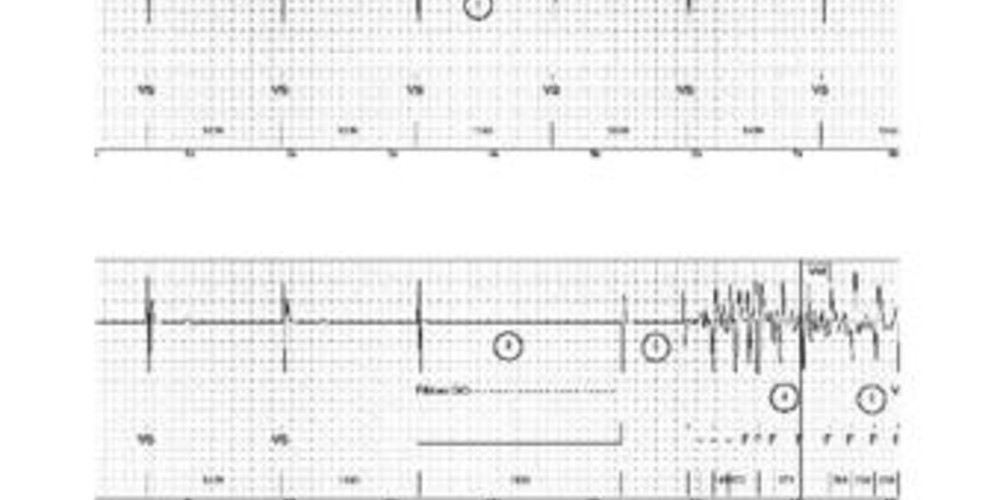 1: Spontaneous rhythm (VS);
2: Delivery of DC for 2 sec;
3: 600-ms post-induction blanking period;
4: VVI episode pacing mode after 4 F cycles;
5: Detection of the episode at the beginning of the capacitors charge;
6: Delivery of 17.5-V shock after confirmation at the end of the charge; 1-sec post-shock blanking period;
7: Unsuccessful shock and persistence of ventricular arrhythmia; redetection of VF after 6 F cycles and re-charge of the capacitors;
8: End of charge;
9: Confirmation of the arrhythmia (>6 cycles in the VF zone since the onset of the charge); no shock delivered on the first cycle following the end of the charge;
10: Second, 34-J shock delivered on the second cycle (short cycle in the VF zone);
11: Successful shock and return to sinus rhythm after 5 consecutive cycles classified in the sinus zone.

Various options were available for this patient. One could, for example, have changed the waveform and polarity of the shock. In Abbott ICDs, the duration of each of the 2 phases of a biphasic shock can be programmed separately. Optimizing these durations as a function of the shock impedance might lower the DFT, particularly when it is high. In the nominal configuration, the RV coil is the anode, which can be reversed without guarantee of greater efficacy. This patient’s single coil defibrillation lead was initially placed on the RV floor, with the distal coil straddling the tricuspid valve. This suboptimal lead position might explain, at least partially, the high DFT, as the electrical field of the shock did not completely encompass the myocardial mass. With the repositioning of the lead in the high septum, sensing was satisfactory, and the successful defibrillation of 2 consecutive episodes of induced VF with 25 J shocks offered a sufficient safety margin. It is also noteworthy that the patient was placed on regimen of amiodarone, which raises the DFT. Its withdrawal might lower the threshold, though probably expose the patient to a higher risk of ventricular tachyarrhythmias. 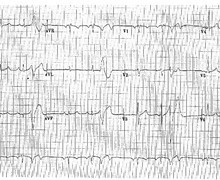 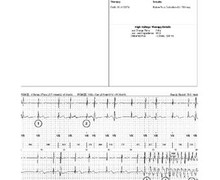 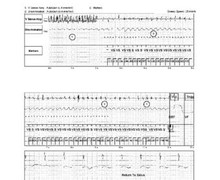 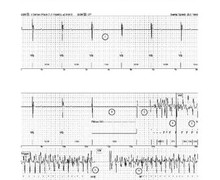