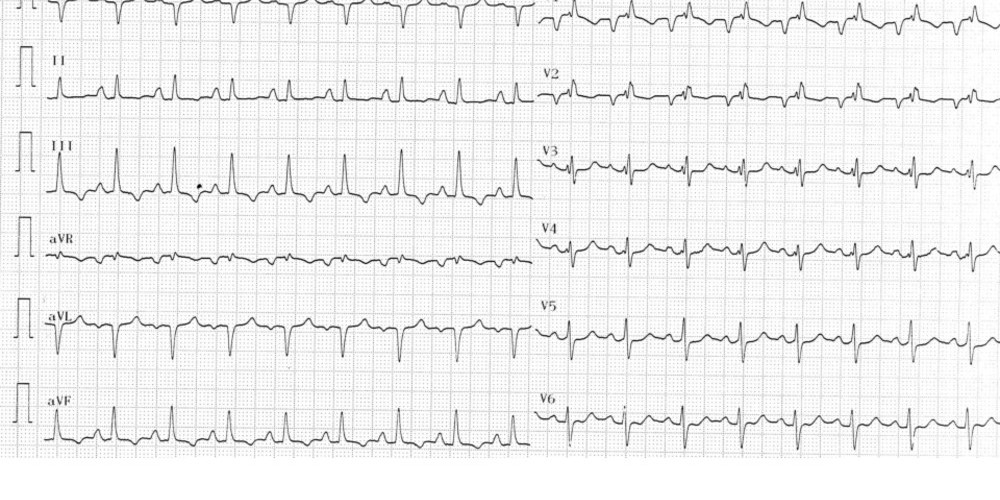 This patient initially presented with chronic bronchitis and emphysema which progressively evolved to chronic respiratory failure. Chronic Obstructive Pulmonary Disease or pulmonary emphysema is a disease of the distal airways defined as the permanent distension of air spaces beyond the terminal bronchiole accompanied by a destruction of the alveolar walls without obvious fibrosis. Centrolobular emphysema, the most frequent form in the smoking patient, usually results from chronic bronchitis, is accompanied by distension of the thorax and may evolve to chronic cor pulmonale.

The electrocardiogram can reveal abnormalities in conjunction with emphysema or its impact on cardiac strain. The two main consequences of emphysema and chest distension are the respective alterations in the position of the heart inside the thorax and the arrangement of the thoracic electrical field surrounding the heart. The increase in the anteroposterior thoracic diameter and the lowering of the diaphragm facilitate the verticalization of the heart and an axial rotation on its longitudinal axis with a posterior displacement of the left ventricle. Moreover, emphysema decreases pulmonary conductivity and impairs the transmission of cardiac potentials limiting the amplitude of the potentials recorded by the cutaneous leads.

It is therefore common to observe the following in an emphysematous patient: 1) a rightward shift of the atrial axis beyond 60° with pulmonary P-waves (increase in P-wave voltage in lead II) and flat or inverted P-waves in leads I , AVL; 2) a right axis deviation of the QRS beyond 90°; 3) a clockwise rotation of the QRS with a late QRS transition, low R wave progression in the precordial leads and the presence of large S waves in left precordial leads with an R/S ratio < 1 in V6; 4) low voltage QRS-complexes globally, particularly in V5, V6, leads I and aVL;

In the event of progression towards a chronic cor pulmonale, the signs of right atrial enlargement and ventricular hypertrophy are increased.

This patient presents a right axis deviation with a QRS axis > 100°. This sign is very poorly specific since it can be observed in many diseases: dextrocardia, right ventricular hypertrophy, pulmonary emphysema, chronic pulmonary diseases, posterior left fascicular block, right bundle branch block, prior lateral infarction, ASD ostium secundum. This axis deviation can also be observed in certain young and lean patients. It is obviously necessary to verify beforehand that the electrodes have not been inverted.

This right axis deviation is accompanied by the presence of a dominant R wave in V1, which can be observed in certain patients with right ventricular hypertrophy, prior inferoposterolateral infarction or posterior left fascicular block. It may also be a normal variant in infants.

Epigraph
Pulmonary emphysema is accompanied by chest distension and a decrease in pulmonary conductivity which impairs the transmission of cardiac potentials. The electrocardiogram typically reveals a pulmonary P-wave, a low QRS voltage, a right axis deviation and a clockwise rotation. 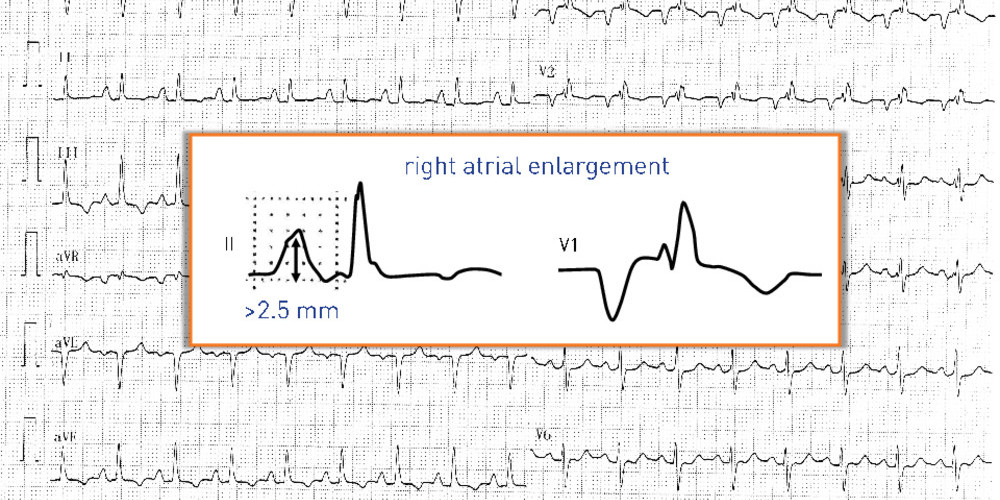