This chapter first presents the discrimination parameters included in the older defibrillators manufactured by Saint Jude Medical and, in a second part, the modifications made in the most recent devices.

The discriminators can be programmed in either or both VT zones but not in the VF zone.

The discrimination algorithms can be programmed to function in all, or only part of, the VT detection zones via a parameter called SVT Upper Limit.

The SVT Upper Limit defines the upper boundary of the SVT Overlap zone (i.e., the fastest rate that a patient’s SVT could achieve). Rates above this limit will not receive discrimination analysis.

The SVT Discrimination Timeout serves as a limit on the amount of time the device can consider a rhythm to be SVT before delivering VT therapy. It is a “fail-safe” feature that enables the system to override an SVT classification after the programmed timeout duration has expired and proceed to deliver VT therapy.

The sudden onset criterion discriminates sinus tachycardia (gradual onset) from VT (sudden onset). This parameter, however, does not discriminate atrial fibrillation (AF) or flutter from VT.

Sudden onset criterion bases action on the past 8 intervals:

The stability criterion discriminates AF (usually irregular) from VT (usually regular). It does not, however, discriminate sinus tachycardia, atrial tachycardia or atrial flutter from VT. The stability delta is the widest difference between the second longest and second shortest cycles, among 12 consecutive
cycles of tachycardia detection. This measurement is always expressed as an absolute value.
Rate stability is constantly re-evaluated throughout the episode. If the stability difference is less than the programmed delta, the rhythm is classified as stable, favoring VT. Otherwise, the parameter favors AF with AV conduction.

The Sinus Interval History (SIH) operates in association with rate stability (programmed on: ON + SIH), in the single chamber models only. This function helps discriminate AF with long and regular ventricular cycles, operating only when the ventricular rate has been classified as stable (Interval Stability has classified a rhythm as a VT), i.e. after 12 cycles (nominal value) in the VT zone.

The long cycles counter increases when:

In this example, at detection, Interval Stability indicates VT, so SIH is checked; SIH count = 10 ( > 2 the programmed value); SIH changes indication to SVT

Arrow indicates detection point (in this example, 12 intervals to detect)

If the number of similar complexes is greater than the programmed value (5 out of 8 or 7 out of 12 nominally according to the devices) the complexes are classified as conducted and the parameter favors SVT. Otherwise, it favors VT. 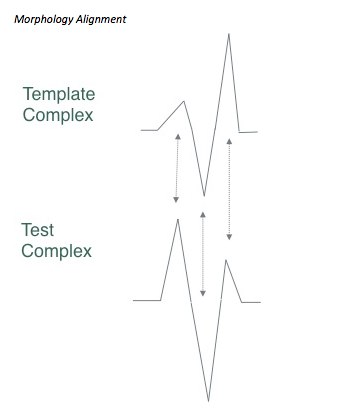 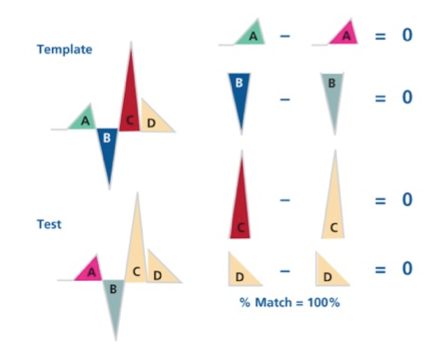 The algorithm breaks the waveform apart into triangular chunks and compares the A pieces, the B pieces, etc. At each point, it determines how much discrepancy there is between template and test. In this case, there is none, which results in a 100% match. In such a scenario, the algorithm would determine the rhythm was an SVT (sinus in origin) rather than a VT. 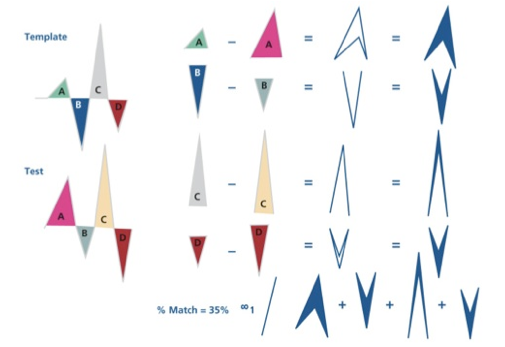 Each part is compared (A to A, B to B) etc. This drawing shows how these particular pieces do not match exactly; the far right shows areas that one waveform has and the other does not (in other words, the blue areas is the one that does not match). The MD algorithm assesses this numerically; in this case, the waveforms are only a 35% match (in favor of VT).

MD starts its scoring process as soon as the first Tach interval is binned. Once a template is stored and MD is turned on, MD scores will be visible on real-time electrograms. 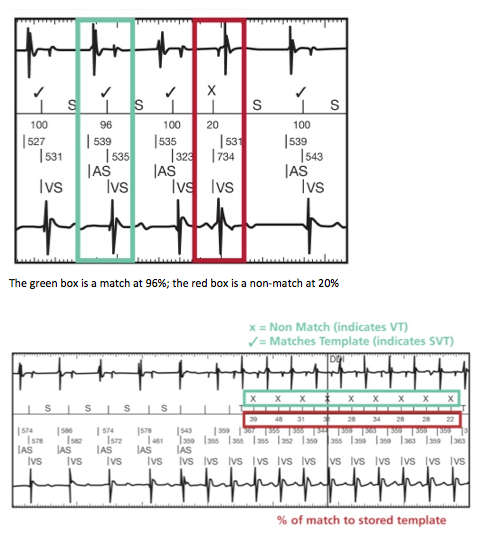 Each criterion can be set on “ON”, “Stop” or “Passive”. The “Passive” mode assesses the performance of a criterion without its inclusion in the discrimination. If all criteria are set on “Passive” or “Stop”, discrimination is de-activated and therapy is delivered, regardless of the tachycardia origin. The greater the number of programmed criteria, the higher the specificity at the cost of sensitivity.

Since these individual discriminators can produce conflicting results, the clinician can program the diagnosis criteria to adjudicate:

Dual chamber devices are equipped with the same discriminators as those described previously, except for SIH, though they are applied differently, depending on the AV relationship used to classify the arrhythmia (V>A, V<A, V=A). The atrial lead enables a continuous comparison of the ventricular (i.e. the median of 12 ventricular cycles of the tachycardia episode) with the atrial rate (i.e. the median atrial rate in the same window) in order to identify the origin of the tachycardia. This comparison is the first discriminator. 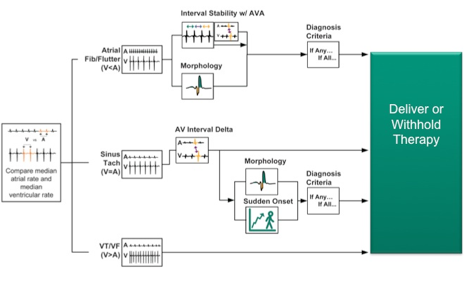 VT arm (V>A)
When the ventricular rate is faster than the atrial rate, the tachycardia is classified as VT. No other discrimination criterion is analyzed.

Atrial fibrillation / flutter arm (V<A)
When the ventricular rate is slower than the atrial rate, one must distinguish AF, atrial tachycardia or flutter, and VT, using the following discriminators:

These discriminators may or may not be combined by programing “One of” or “All” criteria. 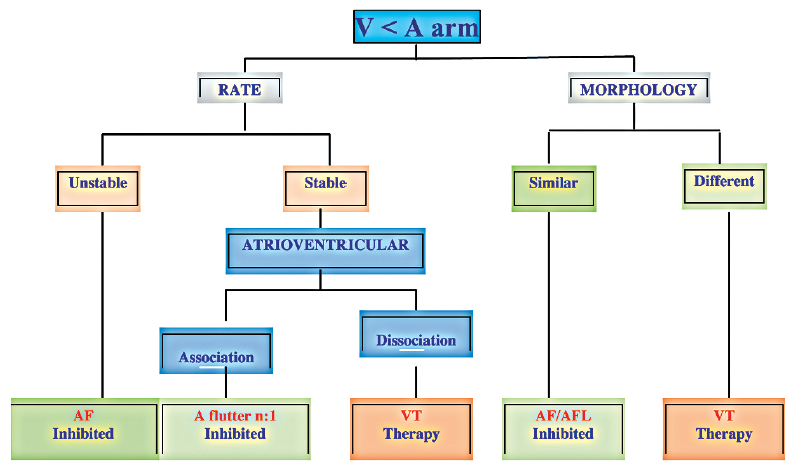 The rate stability and morphology criteria operate as described for single chamber devices. AV association operates on the same principle as rate stability, i.e. the AV association delta measures the difference between the second longest and second shortest AV intervals among the 12 tachycardia detection cycles.
When Interval Stability classifies a rhythm disorder as VT, AV association goes into effect. 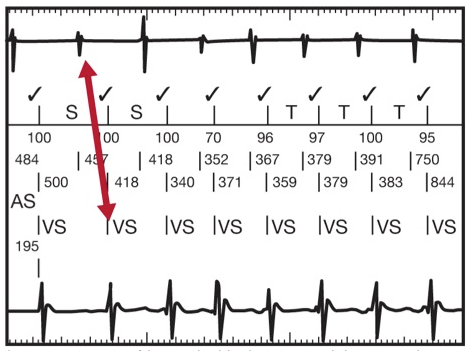 The AV association option of the Interval Stability discriminator works by measuring the distance from a ventricular event to the atrial event that preceded it. The arrow shows the ventricular event and the atrial event that are “associated” for these purposes. The algorithm calculates these intervals for a 12-interval window, throws out the longest and shortest, then of the remaining intervals subtracts the shortest from the longest (measures time from ventricular event to the preceding atrial event and calculates the difference between the second-longest interval and the second-shortest interval). The result is compared to a programmable AV association delta value. If the AV association delta is the same or larger than the result, the rhythm disorder is classified a VT. If the difference is shorter than the programmed delta, the ventricular rhythm is associated, and the criterion favors SVT (atrial flutter or tachycardia conducted in n:1 ratio).

This criterion, intended to discriminate flutter with 2:1 or 3:1 conduction, intervenes only when the rhythm is stable, with a common programming: stability set to ON + AV delta.

The majority of tachycardias in the V=A with 1:1 relationship are SVT (predominance of sinus tachycardias).

If the ventricular and the atrial rates are the same, sinus tachycardia, atrial tachycardia and VT must be discriminated, using the following criteria:

When the AV Interval Delta is enabled and the rhythm is classified in the V=A Rate Branch, then AV Interval discrimination is evaluated first. The difference between the second longest and second shortest AV intervals in a recent history of tachycardia detection intervals must be less than the programmed AV Interval.

Delta AV Interval Delta is programmable from 30 milliseconds (ms) to 150 ms (in 10 ms intervals). It was nominally ON at 60 ms in previous platforms and is now OFF in the most recent platforms.

These 2 criteria may or may not be associated: “One of” or “All” criteria.

In the last generation defibrillators, the chamber onset has been added in this arm (V=A)

With these new devices, the nominal discriminators have been changed:

SecureSense™ : discrimination of noise on the ventricular lead 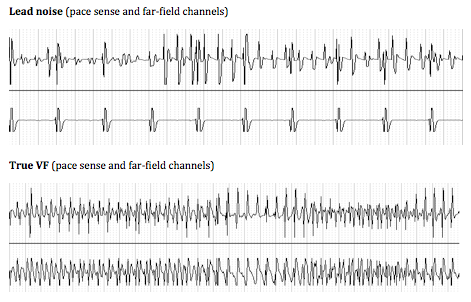 The supplemental SecureSense™ discrimination channel is activated after the sensing of 2 out of 3 cycles in the VT or VF zone. A counter is incremented with each short cycle sensed on that channel. If the discrimination channel senses short cycles (which are directly labeled VS² on the tracing), the counter is zeroed after each pair of cycles. At the time of diagnosis, if this counter is ≥10, therapy is inhibited. The counter is re-evaluated with each re-detection and before the delivery of a shock. It is de-activated after the first therapy. 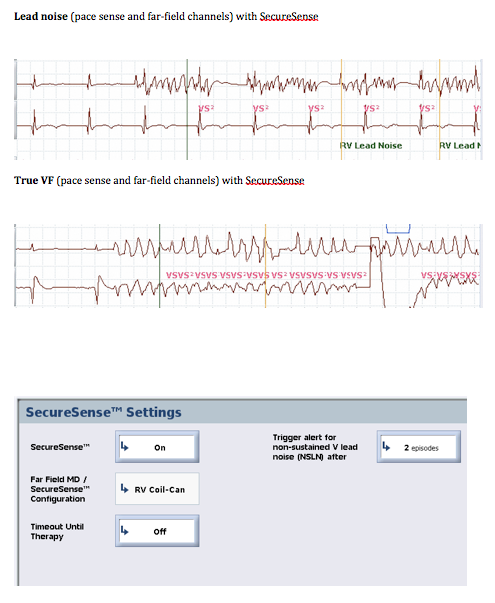 The Far-field morphology discrimination (MD) algorithm uses the unipolar discrimination channel, which enables a finer analysis of the QRS morphology. The morphology of bipolar signals is often less effective than the far-field signals morphology. The bipolar signal strictly reflects local depolarization near the electrode. If the depolarization wavefront of a VT propagating near the detection dipole is similar to that of sinus rhythm, the morphology of a bipolar electrogram can be misleading. The far-field signal incorporates the depolarization of both ventricles and approaches that of a surface electrocardiogram.

In this example, the bipolar morphology in sinus rhythm and during VT is close, whereas that of the far-field signal is totally dissimilar.

During the detection of a tachyarrhythmia, the far-field morphology discrimination algorithm examines cycle-by-cycle the unipolar discrimination channel (besides the bipolar channel) in order to compare the shape of each QRS complex on the unipolar channel with the far-field reference signal stored during sinus rhythm. From this comparison with the reference complex, a correlation score (or percentage of similarity) is calculated for each QRS recorded during the tachyarrhythmia, using 8 evenly spaced fiducial points on both electrograms. The bipolar channel is used to synchronize the measurements with the reference complex, while the unipolar channel is used to ascertain its similarity. 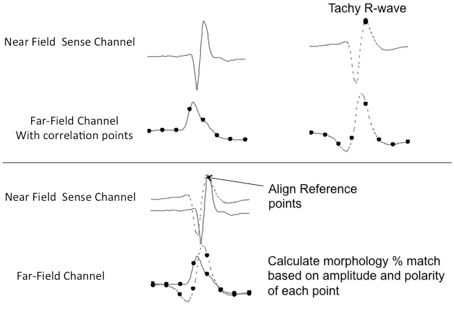 The device automatically identifies PVCs and excludes them from the template ensemble average; ventricular extrasystoles are defined as:

The heart rate must be also lower than 120 bpm.

Periodic and automatic updates adjust the template ensemble average for changes in sinus morphology (more frequent and more progressive update of the reference morphology). Each new template update averages in the new representative QRS complex as 1/16th of the overall sinus QRS template.

To enable the update of the reference (automatic template updates) in the event that a template has not been acquired in more than a week due to high % pacing demands and to encourage intrinsic activity:

The rate and AV delay hysteresis used to acquire the reference signal are programmable.

If the amplitude of the far-field signal is <1 mV, it should not be used in the update, a warning dialogue will appear suggesting to try the other configuration (RV tip - can).

Nominally, 90% or higher to be considered a match (SVT) and 3 out of 10 complexes must match to diagnose SVT.

Identification of the source of onset of tachycardia

The sudden onset criterion is currently the same in single and dual chamber defibrillators, based on the ventricular rate and mean intervals only. In the A = V arm, sudden onset only discriminates sinus tachycardia, and is systematically confused by atrial tachycardias.

This new algorithm applies simultaneously the atrial and ventricular intervals to identify the chamber responsible for the arrhythmia sharpening the discrimination between SVT and VT and, in particular, the discrimination of the following rhythms:

The discrimination by initial chamber is available in the last generations of dual and triple chamber St. Jude Medical™ defibrillators, in the V = A rate arm.

Analysis of the atrial and ventricular rate to detect a sudden onset in both chambers:

5 previous cycles with a > 20% difference in cycle length;

5 next cycles with a > 10% difference in cycle length; 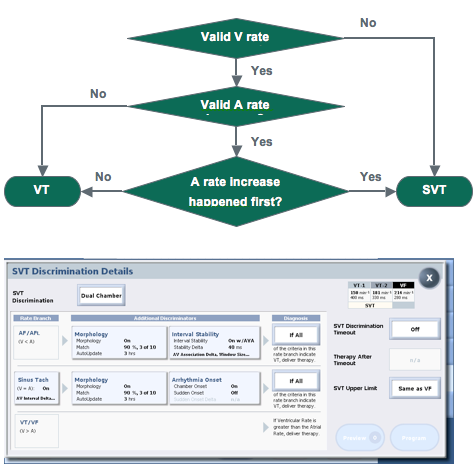