Sensitivity and detection of arrhythmic events

The proper function of a defibrillator requires a flawless sensing of the rapid, low-amplitude signals of ventricular fibrillation (VF), without sensing a) cardiac signals other than the QRS and b) extra-cardiac signals. Consequently, the programming of sensitivity must be high and the refractory periods must be short. Unlike a pacemaker, the sensing threshold is not programmed at a fixed value; instead, it adapts automatically in reference to the amplitude of the preceding R wave. Sensitivity increases thereafter throughout the cycle, in search of a possible low-amplitude signal. 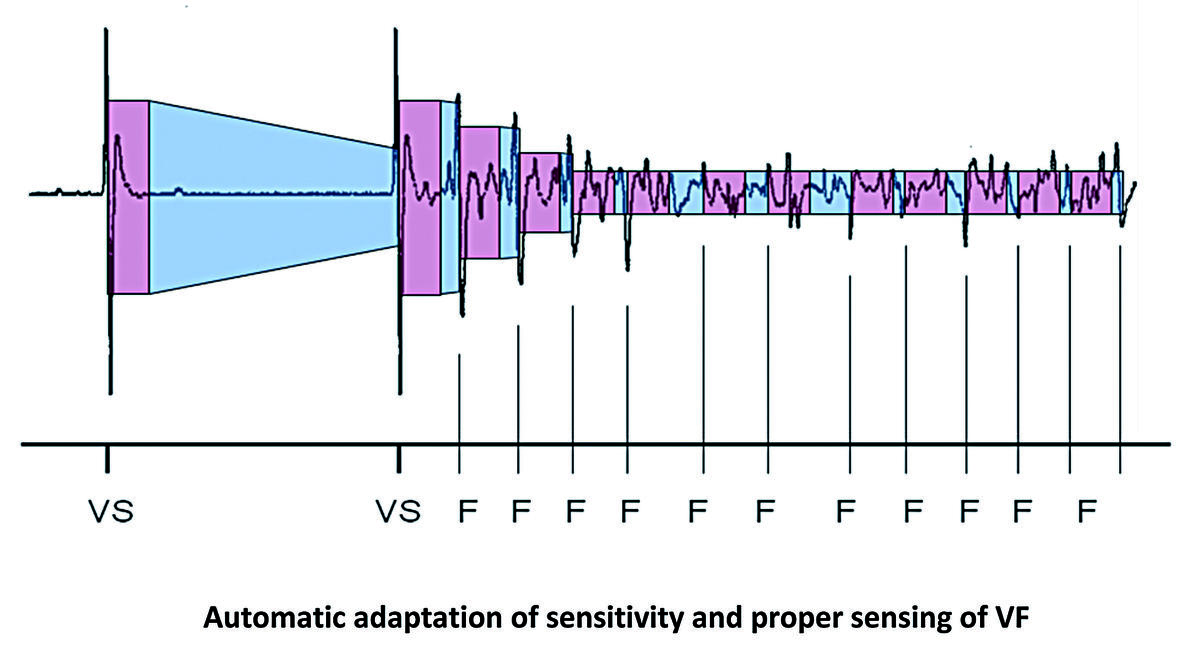 Once a signal has been sensed, at the end of the refractory period, the level of adaptation of the sensitivity starts at a programmable percentage of the sensed R wave amplitude, remains fixed during a programmable delay of adaptation, before increasing gradually to the programmed sensitivity level.
To provide accurate sensing of true VF without oversensing the T-wave during sinus rhythm, different settings for the following parameters can be modified: 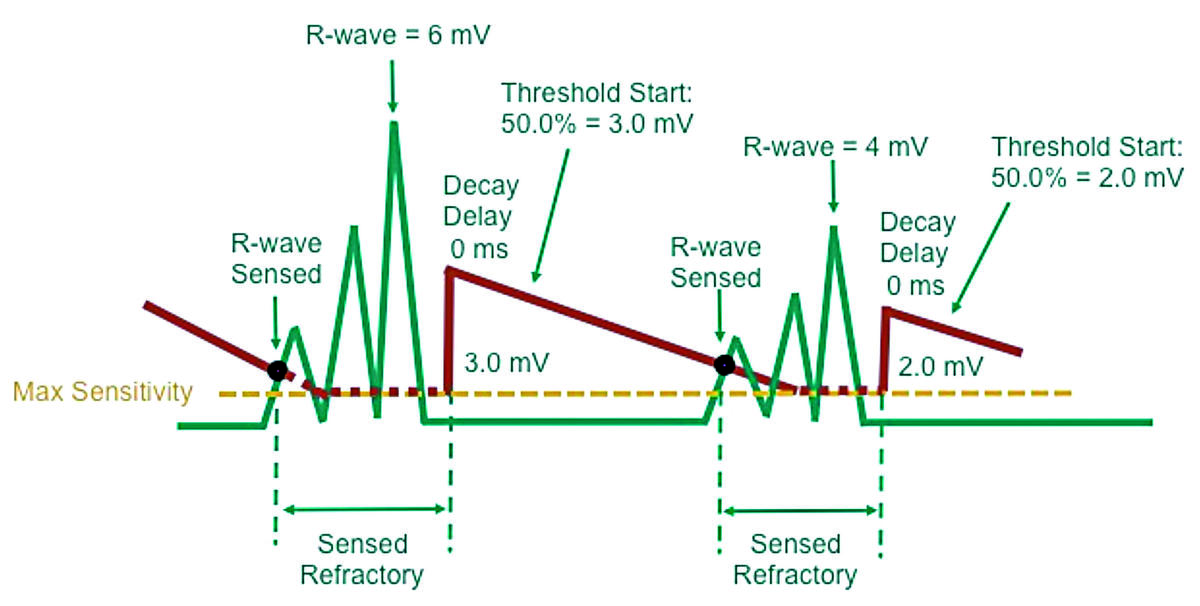 This figure shows the potential interest of prolonging the decay delay to avoid T-wave oversensing.
The nominal values of these different parameters depend on the programing of the low filters attenuation (LVA):

The choice of ranges of heart rates prompting interventions by a defibrillator is a critical programming step. State-of-the-art defibrillators enable the programming of several zones of arrhythmia detection based on the sensed RR intervals. Each zone has its own rate and duration criteria and can be specifically programmed with a view to identify and treat arrhythmias.  The Detection Interval/Rate parameter is the interval/rate that must be exceeded within each rate zone to be counted toward detection of a tachyarrhythmia. Faster rates (in bpm) mean shorter cycle lengths (in milliseconds).  The Detection Interval/Rate is independently programmable in each rate zone. Each detection interval must be at least 30 ms longer than the next fastest detection interval.

One to three detection zones can be configured at the discretion of the physician. Zones allow the clinician to deliver different therapies to rhythm disorders of different rates. In addition, a “Monitor Zone” can be set up where the ICD still evaluates the rhythm (diagnostics are collected and discriminators can be applied) but does not deliver therapy.

The number of zones and the range of rates programmed must be adapted to the patient’s characteristics, history and implant indications.

In a patient presenting with heart failure, zones of heart rates are programmed as a function of the VT cycle prompting the device implantation. The programmed lower limit of the VT zone is usually 20 bpm below the rate of the clinical VT, as the introduction or addition of antiarrhythmic therapy after the defibrillator implantation might slow its rate.

In patients suffering from heart failure, the risk of developing VT after device implantation is high, probably justifying the programming of 2 zones of VT detection and treatment besides the VF zone. The choice of 2 distinct zones of VT has the distinct advantage of enabling the specific treatment of very rapid tachycardias, favoring painless anti-tachycardia pacing over the delivery of electric shocks. This was confirmed in the PAIN FREE I and II clinical studies, where anti-tachycardia pacing avoided 75% of shocks in the fast VT zone, significantly improving the quality of life without significantly increasing the rate of adverse events.

The risk of inappropriate therapy for supraventricular tachycardia is non-existent, allowing a relatively slow setting of the rates prompting interventions by the device, without lowering its specificity. Discrimination algorithms are, therefore, unnecessary, as all spontaneous tachycardias are ventricular in origin.

In young and active patients:

The risk of inappropriate therapy delivered for physiologic acceleration of the heart rate or for atrial fibrillation must be included in the decision to program several therapeutic zones, while attempting to limit the overlap of rates prompting defibrillator interventions and physiologic heart rates.

In patients presenting with Brugada syndrome:

The onset of organized VT is highly unlikely, whereas the risk of atrial fibrillation is increased. Consequently, the programming of a zone of detection and treatment of VT in addition to a VF zone is probably not only unnecessary, but also risky. The addition of a supplemental zone of monitoring allows the recording of slow tachy-arrhythmias, which helps adapting the programming. A single VF zone is usually programmed with a low inferior limit of this relatively high rate (>210 bpm) zone.

The classification of intervals is based on the instantaneous RR duration and the average of the last 4 cycles.
The ICD measures intervals and counts them in bins. An interval is the time period (in milliseconds) from one interval to the next (paced and/or sensed) in one chamber. The current interval (CI) is the interval of time between sensed ventricular events. The average interval (AI) is the average of the four most recent CIs.

Intervals are counted until a bin reaches capacity. When a bin is full, that particular rhythm is “detected”.
All counters operate simultaneously:
An increment of the fastest zone counter does not increment the counter of the slower zones.

The first counter reaching the number of programmed cycles determines the detection, the type of event and, perhaps, the therapy(ies) delivered. These cycles are not necessarily consecutive. The same applies to post-therapy redetection, which has its own, separate counters.

Sensing & Detecting episodes
Sensing and detecting episodes Detection zones SENSING AND DETECTING EPISODES Auto-adjusting sensitivity The effective operation of an Implantable Cardioverter Defibrillator (ICD) relies on its ability to detect both fast ventricular signals and low amplitude ventricular fibrillation signals without detecting T waves or extra-cardiac signals when the patient is in sinus rhythm. In order to ensure appropriate sensing, the device should be programmed with a high sensitivity (low detection threshold) and short refractory periods. Unlike a pacemaker the detection threshold is not programmed to a fixed value. The detection threshold automatically adjusts based on the amplitude of the preceding R-wave. Following a sensed or paced ventricular event the detection circuit starts a blanking period...