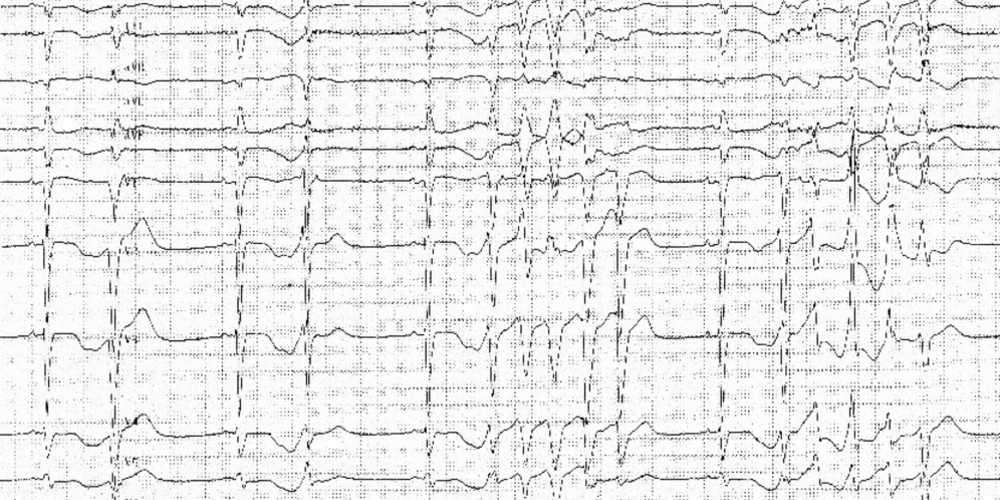 This patient presented syncopes occurring in the setting of an extremely long QT interval induced by the coexistence of ischemic heart disease, limit serum potassium values (3.5 at entry) as a result of diarrhea and by a double drug intake contributing to the prolongation of the QT interval: a macrolide and an antihistamine. The discontinuation of these treatments and potassium supplementation corrected this long QT pattern and avoided the recurrence of the torsades de pointes and syncopes. The list of medications to be avoided in the future because of their effect in prolonging of QT interval was conveyed to the patient and her attending physician.

The iatrogenic prolongation of the QT interval has been known for several decades with the discovery of torsades de pointes after the introduction of a quinidine treatment, a class 1 antiarrhythmic treatment prolonging the action potential and the QT interval by interfering with the functioning of the potassium channels. The prolongation of the QT interval is not only confined to medications prescribed for cardiology but can also be observed with certain psychotropics, antibiotics, antihistamines, etc. The potentially lethal risk of associated rhythm disorders represents a genuine nightmare for the pharmaceutical industry and for medical teams, since the occurrence of arrhythmias is most often rare or even exceptional but with catastrophic consequences. A number of drugs have been withdrawn from the market in this setting. The question of necessary minimum supervision is also raised. The possible increase in  QT interval following the introduction of macrolide therapy is known and associated with a modest but significant increase in the occurrence of a severe rhythm disorder (1 case per 8000 patients) or sudden death (1 case every 30,000 patients). The question of withdrawing this treatment from the market has arisen notwithstanding the fact that a macrolide is the first-line treatment for certain diseases (community pneumonia, Helicobacter pylori treatment, legionellosis) and the alternatives are few and are also associated with certain limits (undesirable effects, risk of resistance).

The question of the supervision to be proposed after the introduction of this treatment is raised. While the performing of a systematic electrocardiogram in hospitalized patients is likely achievable, such is not the case when introduction of the treatment is carried out at home. Moreover, the interpretation of the tracing and the detection of a prolonged QT interval may prove difficult (not in this patient in whom the increase in QT is "monstrous"). It is likely not recommended to prescribe two QT-prolonging medications at the same time and it is recommended to verify the electrocardiographic pattern in patients with one or more associated risk factors: hypokalemia, hypomagnesemia, etc.

Epigraph
Various cardiovascular (antiarrhythmics) and non-cardiovascular (psychotropics, antibiotics, antihistamines, etc.) drug classes can induce prolongation of the QT interval which can contribute to the occurrence of a torsade de pointes. 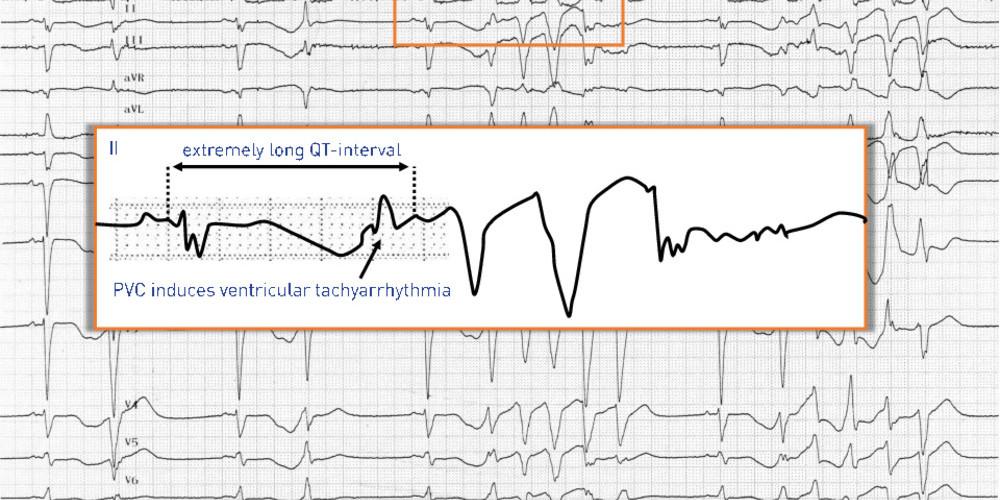