The several steps of a device implantation procedure include the a) venous access, b) introduction of a guiding sheath in the right atrium, c) cannulation of the coronary sinus, d) opacification and selection of the target vein, e) implantation of the lead, and b) removal of the sheath. In recent years, new leads of various shapes and sizes have been developed. Once the venous network has been opacified, a stimulation lead is chosen that corresponds closely to the anatomical characteristics of the target vein. This choice is determined by the sizes of the ostium and body of the target vein, such that the lead diameter and size of the vascular internal lumen fit tightly. Some variables, such as a high capture threshold or the likelihood of diaphragmatic stimulation are unpredictable, though, ultimately, have an influence on the choice of stimulation site and, therefore, on the choice of optimal lead.

The various programming options available enable the selection of a LV stimulation polarity associated with a reliable and durable myocardial capture with the least amount of power necessary in order to maximize the longevity of the device, without stimulating the phrenic nerve. The programming of the stimulation amplitude must optimize the battery life while preserving a sufficient safety margin. The LV epicardial stimulation threshold is often higher (twice as high in one study) and more variable than the RV stimulation threshold. It might not be possible to obtain a safety margin as high as twice the capture threshold since, when >2.0 V, the batteries will likely be prematurely depleted. In some patients the stimulation amplitude and pulse width must be meticulously programmed to capture the left ventricle without phrenic nerve stimulation. The influence of the LV stimulation configuration on the quality of response to cardiac resynchronization remains to be determined and rarely represents a selection criterion.

The armamentarium offered by the various device manufacturers includes uni-, bi- and quadripolar LV leads. The stimulation polarity is programmable in the left ventricle by choosing a quadripolar (4 electrodes) or non-quadripolar (1 or 2 electrodes) lead. If a unipolar LV lead is implanted, a single configuration (LV tip à RV ring or RV coil) might be programmable depending on the manufacturer and type of device. With most defibrillators, the RV coil is used instead of the RV ring. With CRT-P, the RV ring (proximal electrode of a bipolar lead) is used. With some devices and, depending on the manufacturer, the pulse generator may participate in the stimulation vector, offering the programming of LV tip à pulse generator (can) as second choice of stimulation configuration. If a bipolar LV lead is implanted, between 3 and 6 configurations are available depending on the manufacturer and type of device. The threshold is often higher with LV ring à RV coil configuration and the distal LV electrode (cathode) is preferentially used as the active electrode, while the RV coil or LV ring (anode) are used as the indifferent electrode. If a quadripolar LV lead is implanted, between 12 and 17 configurations are available depending on the manufacturer and the type of device. This multitude of choices allows an optimization of the capture threshold and a lower likelihood of phrenic nerve stimulation. With a wide spacing of the electrodes, the activation sequence can be varied, for example by choosing a distal (apical) versus proximal (basal) electrode. This choice may have a positive impact on the response rate, despite the paucity of criteria objectively predictive of the quality of response to therapy. St. Jude Medical makes the only devices, which offer a choice of dual site LV stimulation, as an increase in the number of stimulated sites is likely to decrease the activation dyssynchrony.

The pulse strength influences the likelihood of anodal capture. The cathode at the tip of the LV lead is usually smaller than the anode, explaining the high current density at that site. A strong pulse may create a high enough current density to capture the tissue near the anode. The RV ring of CRT-P is often used as anode to stimulate the left ventricle. A high-amplitude stimulation may cause an anodal RV capture resulting in triple-point stimulation: LV and RV cathodes + RV anode. Anodal capture is more likely when the LV stimulation configuration includes a true RV bipolar lead (lead ring) instead of an integrated bipolar lead (since the anode is the distal coil), probably because the small size of the ring promotes a higher current density. The electrocardiographic morphology is often slightly modified compared with the usual BiV appearance. A 12-lead electrocardiogram, instead of the single channel of the programmer, is usually needed for the diagnosis. On the other hand, an anodal capture may considerably modify the analysis of the tracings during the LV threshold test. The hemodynamic effect of this type of stimulation, which increases the number of stimulated sites, might be positive, though the clinical results remain to be seen. An anodal capture usually requires strong stimulation pulses, which shorten the devices’ life expectancy.

The function of the automated LV threshold is often very close to that described for the RV lead. The threshold measurement is based on the analysis of the evoked response, or by observing the synchronization of the RV events sensed after a stimulated LV event. The threshold is measured at regular intervals of between 8 and 24 h, depending on the manufacturer, after which a safety margin is programmed, without further cycle-by-cycle verification of capture. It is noteworthy that triple chamber devices do not verify the cycle-by-cycle LV or RV lead capture.

When an unipolar LV lead is implanted, the 2 configurations that can be programmed on a CRT-P or CRT-D are the LV tip à pulse generator and the LV tip à proximal RV. With the Ilesto CRT-P or CRT-D models, the proximal RV electrode is the ring of the RV lead (proximal electrode), whereas with the new defibrillator models, the RV electrode is the coil of the RV lead (likewise for the bipolar and quadripolar configurations).

The 2 electrodes are the LV tip and ring. When a bipolar LV lead is implanted, 5 configurations can be programmed on the triple chamber defibrillators (shown on the following figure). With a CRT-P, a 6th LV ring à pulse generator configuration can be added. 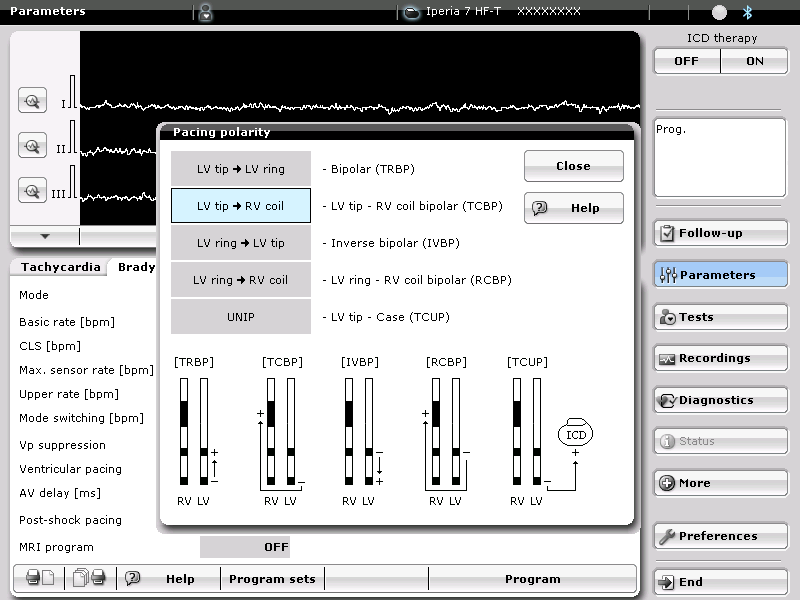 This lead can accommodate 12 different configurations.

Threshold measurements are based on an analysis of the evoked response, without cycle-by-cycle verification of capture. The threshold is measured once daily at a programmable time (default = 2:00 AM), beginning at a programmable amplitude (default = 3.0 V), and decreasing initially in 0.6 V, followed by 0.1 V steps. During the threshold measurement, the VV delay is programmed at 50 ms (LV preexcitation). Once LV capture has been lost, RV stimulation occurs at the end of the VV delay, to eliminate the risk of asystole in pacemaker-dependent patients.

Once the LV threshold stimulation measured, a safety margin is set for the next 24 h.

After the implant of an unipolar LV lead, 2 programming choices are available, since the pulse generator can be included in the stimulation vector.

The 2 electrodes are the distal and proximal LV. After the implant of a bipolar LV lead, 6 programming configurations are available.

The 4 electrodes are labeled dist LV1, prox LV2, prox LV3 and prox LV4, with dist LV1 as the most distal electrode, and 17 different programming configurations are available.

The PaceSafe LV function is available for all unipolar and bipolar stimulation configurations, though is not available with the IS4 (quadripolar lead) defibrillators.

In the ambulatory setting, the threshold is automatically measured every 21 h with the following programmed settings: paced AV delay at 140 ms; sensed AV delay at 110 ms; rescue RV stimulation occurs throughout the LV test with an 80 ms LV preexcitation. The initial amplitude corresponds to the programmable maximum amplitude, decreasing in 0.5-V steps above 3.5 V, and in 0.1-V steps below 3.5 V.

The measurement of the threshold is based on an analysis of the evoked response. The evoked response channel is an unipolar sensing channel that utilizes the distal or proximal LV electrode, depending on the programmed stimulation configuration. Should the daily test fail, the LV PaceSafe function returns to the previously measured output, and up to 3 new attempts are then made, at hourly intervals. Should the daily test fail over 4 consecutive days, a lead alert is triggered and the PaceSafe LV function switches to “Failure” mode (delivered output = 5 V/0.4 ms).

If the automatic adaptation has been programmed, following the measurements made at 21 h intervals, the output is then adapted with a programmable safety margin between 0.5 and 2.5 V, without cycle-by-cycle verification of capture. Instead of being adapted relatively to the very last measurement, the LV stimulation output is set with a programmable safety margin added to the threshold measured at the time of the last 7 successful tests performed during ambulatory follow-up. This enables a rapid increase in stimulation amplitude, should the threshold increase suddenly. It is noteworthy, that a single low threshold measurement does not lower the stimulation amplitude.

The 4 electrodes of a quadripolar lead are LV1 (most distal), LV2, LV3 and LV4, which offer 16 different stimulation configurations.

This test, available with devices that accommodate quadripolar leads, simplifies the choice of configurations by measuring automatically impedance and LV capture threshold with a variety of polarities. The results of the test include the capture threshold, the estimated effect of the programming on device longevity, the lead impedance at each polarity and, if desired, the threshold of phrenic nerve stimulation. These results are used to optimize the stimulation polarity, set the pulse amplitude and duration, guarantee the control of the threshold test, limit the energy consumed and, thereby, optimize the device longevity.

The test of the 16 possible vectors takes 2 to 3 min. The polarities known to stimulate the phrenic nerve can be excluded.

LV Capture Management is scheduled daily at 1:00 a.m. Unlike the RV threshold where the evoked response serves to identify the capture, the device observes the synchronization of sensed RV events after stimulated LV events as an indication that capture has occurred.

In a pacemaker-dependent patient (in complete AV block), the control of the LV threshold may generate an atrial event without ventricular capture. 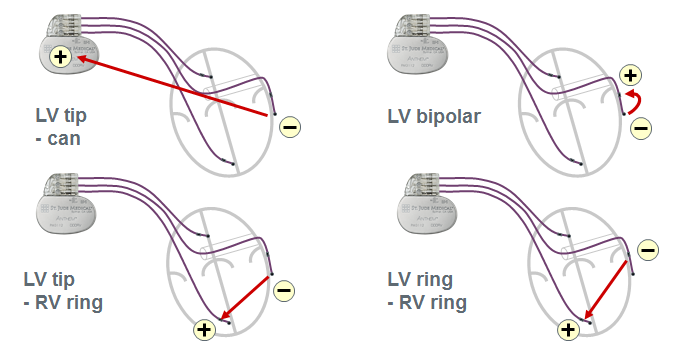 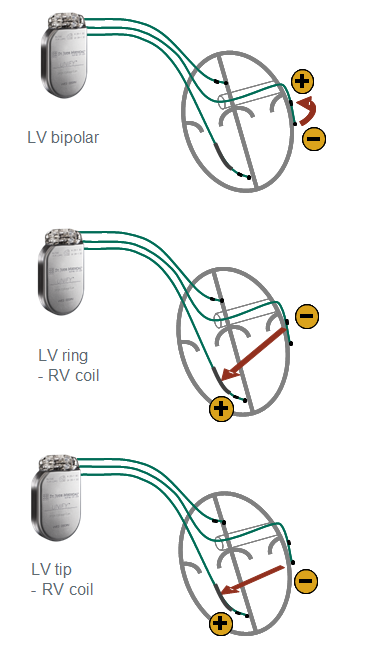 A CRT-P connected to a quadripolar lead enables 14 different configurations. From most distal to proximal, the 4 electrodes are Distal 1, Mid 2, Mid 3 and Proximal 4. 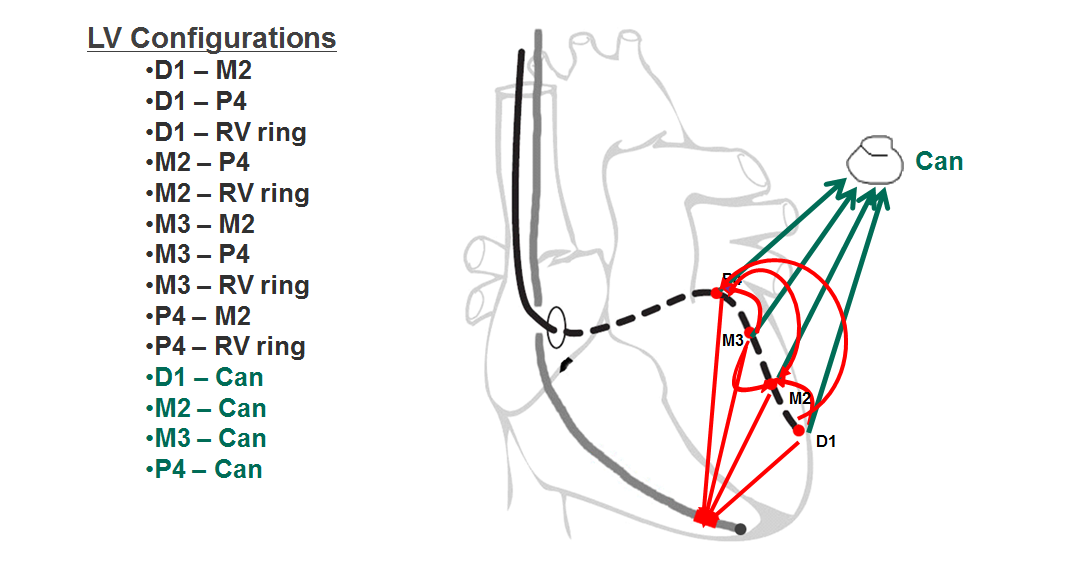 A CRT-D connected to a quadripolar lead enables 10 different configurations. 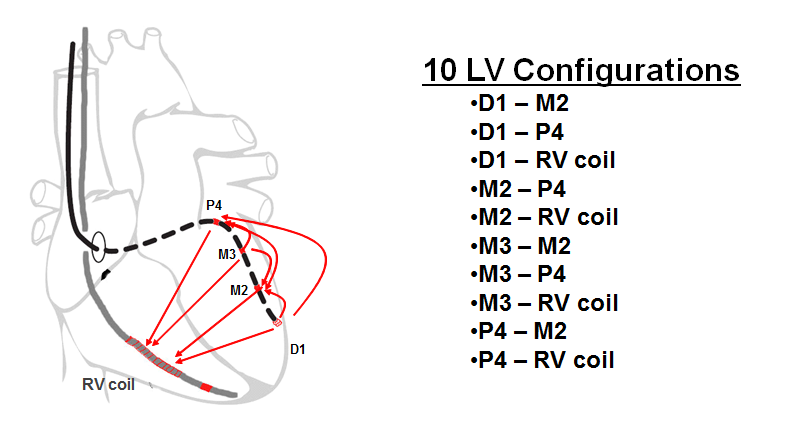 The automated measurement of the LV threshold in the ambulatory setting is programmable between every 8 to 24 h. The measurement is based on the sensing of the 1st derivative of the evoked response signal, which must be tested in order to adjust its sensitivity. When the automated adaptation has been activated, after every 8 to 24 h measurements, the delivered pulse amplitude is adapted with a programmable safety margin between 0.25 and 2.5 V (nominal = 1.0 V) without cycle-by-cycle verification of capture.