Defibrillators were historically developed to terminate life-threatening ventricular arrhythmias with an electrical shock. Several shock wave characteristics, such as the vector, the amplitude and the number delivered can be programmed.

The initially monophasic waveforms became biphasic in more recent defibrillators, which lowered the defibrillation threshold. The first phase of a biphasic shock is equivalent to that of a monophasic shock with a lesser critical mass; the second phase returns the membrane potential to as near to zero as possible to prevent the re-induction of VT tachycardia or VF. For a voltage-controlled shock, the charged voltage is 100%, tilt of the first phase is 40% meaning that 60% of the initial voltage is delivered during the first phase (fixed tilt at 60). The cut-off voltage of the second phase is 20%, meaning that 50% of the remaining voltage (40%/2) is delivered during the second phase (tilt at 50). This is a 60/50 fixed-tilt, voltage-controlled biphasic shock. The delivered voltage is constant, and the duration of each phase varies depending on the shock impedance, i.e. increasing as the impedance increases. 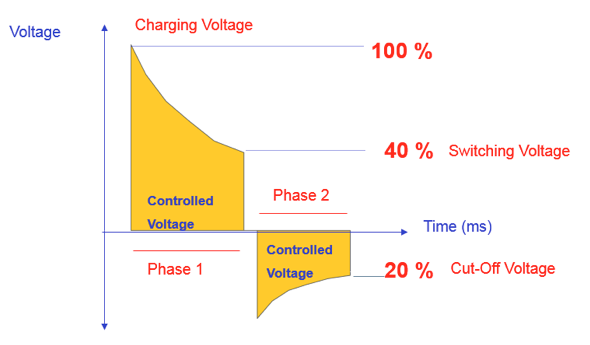 A second shock wave can be programmed (biphasic II, voltage/controlled pulse duration). The voltage load is 100% and the tilt of the first phase is 40%. The cut-off of the second phase occurs after a fixed, 2-ms pulse duration. This can be programmed in patients whose defibrillation threshold is high, particularly when treated with amiodarone, which increases the threshold. 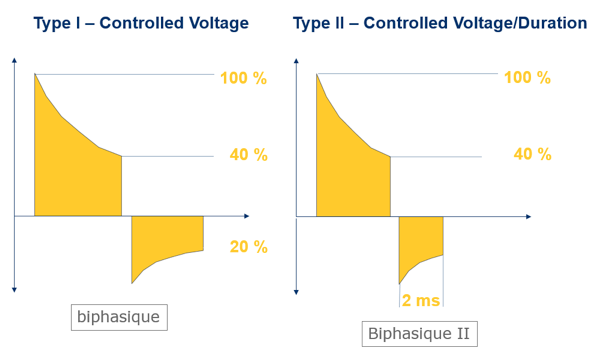 Most state-of-the-art defibrillators enable the programming of the polarity and shock vector. These choices can be useful in case of high defibrillation threshold, and offer the highest likelihood of effective shock delivery. The shock polarity can be set on normal, reversed or alternating. With a single coil lead, a normal polarity for Biotronik defibrillators means that the shock is delivered between the can, as the anode, and the right ventricular coil as the cathode. With a reversal of polarity, the right ventricular coil becomes the anode, which inverses the 2 phases of a biphasic shock (negative first phase and positive second phase). With a dual coil lead and a normal polarity, the shock is delivered between the can and the distal, right ventricular apical coil and between the proximal shock coil in the superior vena cava and the distal right ventricular apical coil. With a reversed polarity, the current direction is opposite. When the polarity is set on alternating, the first shocks’ polarity is normal, then alternates between normal and reversed after the delivery of a first shock of maximum energy. 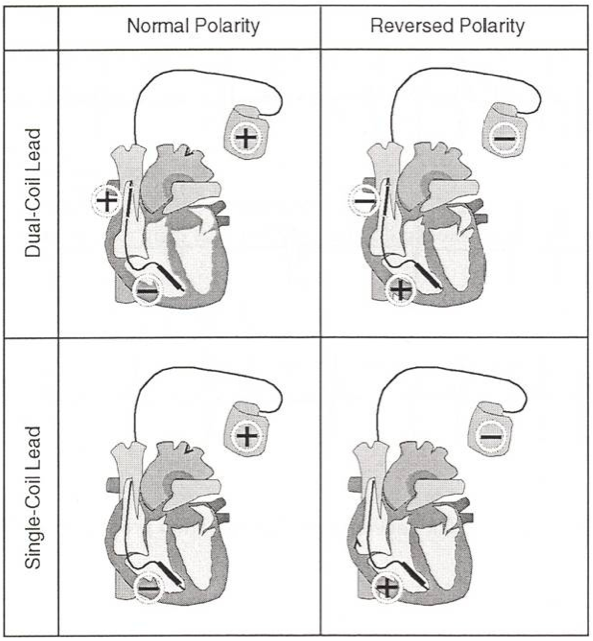 The energy of first shock delivered in the various zones is programmable between 2 J and maximum, while the energy of the second shock is programmable between 4 J and maximum; the energy of the second shock must be greater than that of the first. The following shocks are delivered at the highest energy. In the VF zone, the energy of the first and next shocks is usually programmed at the highest capacity of the device. The setting of the defibrillation shocks amplitude can be guided by the defibrillation threshold, defined as the lowest energy that converts VF to sinus rhythm. In the VT zone, the first shock amplitude can be programmed empirically between 5 and 10 J, which spares the battery and shortens the charge of the capacitors, or at high amplitude to increase the likelihood of arrhythmia termination.

A priority of device programming is to limit the delivery of electrical shock therapy without compromising the patient’s safety. The least aggressive and painful method should be adopted to terminate the tachyarrhythmias. The principle behind ATP is to capture and interrupt an organised VT by penetrating its circuit propagating through the ventricles. Therefore, the ventricle must be paced at a rate faster than that of the tachycardia. ATP is painless and, by lowering energy consumption, spares the pulse generator’s batteries. It must, therefore, be favoured as a first choice for the treatment of organised, even very rapid ventricular rhythms. The efficacy of this type of therapy has been confirmed for a wide range of VT, from slow to as fast as 240 bpm. Consequently, the defibrillators manufactured by Biotronik Inc. enable the programming of a salvo of ATP in the fast VT zone, as well as in the VF zone before the charge of the capacitors. Durant a sequence of ATP, the pacing mode is VOO with 7.5-V/1.5-ms pulse amplitude.

The efficacy of ATP can be optimised by the programming of various settings.

In a burst, the number of pulses in each sequence is fixed, or a cycle may be added to each sequence, though the duration of the cycles within the sequence remains constant. The pacing rate, however, might change from one sequence to the next if the rate of the tachycardia changes. In a ramp, the cycle length decreases from one pulse to the next by a programmable decrement. For example, if the programmed decrement duration is 10 ms, each pacing cycle is shorter than the previous one by 10 ms. In a burst + extrasystole, a premature stimulus is delivered at the end of the burst, an option that is no longer available from the Lumax 740 model onward. 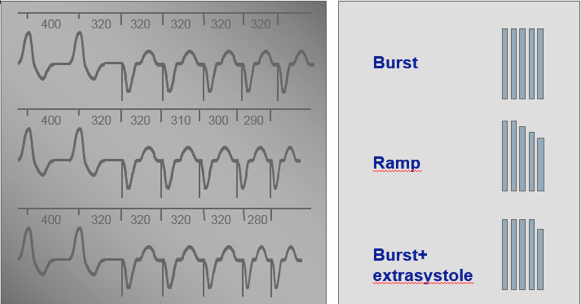 The number of programmed consecutive pulses vary between 5 and 10 per pacing sequence. Between 1 and 10 cycles are programmable for a burst or ramp. An insufficient number of pulses do not penetrate the tachycardia circuit and the salvo is ineffective. Conversely, too many pulses risk of terminate then re-induce the tachycardia. It is possible to add a cycle between each sequence.

The duration of the pacing cycles is expressed as a programmable percentage of the tachycardia cycle length between 70 and 95%, and is usually programmed between 80 and 90% of the detected interval. The shorter that duration, the faster is the pacing rate and the higher is the risk of accelerating the tachycardia. A ramp requires the programming of a 5- to 40-ms increment between each cycle. The device cannot, however, exceed a 300 bpm pacing rate (200 ms cycle length).

The scan decrement: if the rate of the tachycardia remains unchanged, the cycle length of the next pacing sequence decreases by programmed scan decrement. 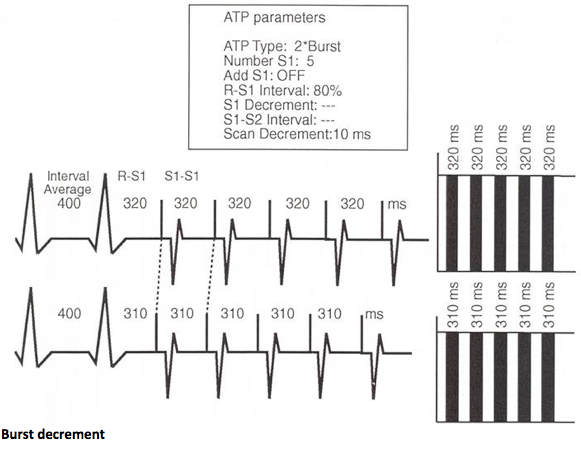 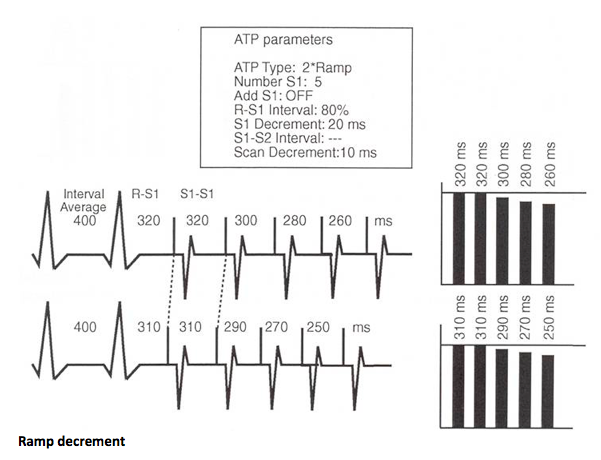 The number of pacing sequences varies as a function of the rate of the tachycardia. Between 1 and 10 sequences of the same therapy are programmable. For a slow VT, several sequences can be programmed in order to delay as much as possible the delivery of shocks for tachycardias that do not immediately threaten the patient’s survival. One might even, in a slow VT zone, forgo altogether the programming of an electrical shock. For tachycardias between 150 and 200 bpm, 3 to 6 consecutive sequences of ATP are usually programmed, while for faster VT, a single sequence is programmed, to lower the risk of unsuccessful therapy and delayed delivery of shocks for a tachycardia that is hemodynamically unstable and threatens the patient’s prognosis.

Pacing configuration: in single or dual chamber mode, pacing is necessarily right ventricular. With a triple chamber device, the pacing mode can be biventricular or right ventricular. While the initial programming is empiric, it must, thereafter, be adapted a) to the various arrhythmias recorded by the device and analysed during the patient’s follow-up, and b) according to the anticipated efficacy (arrhythmia termination) / adverse effect (acceleration of arrhythmia) ratio associated with a given pacing sequence.

Antitachycardia pacing in the vf zone

ATP is capable of terminating fast VT. In the most recent devices, burst can be programmed to be delivered in the VF zone, before the charge of the capacitors. Successful one-shot ATP is a painless and energy saving treatment of VT. The tachycardia, first of all, must be regular (≤12% stability threshold). Once the diagnosis of VF confirmed, the device delivers a burst of ATP (8 stimuli at a cycle length corresponding to 85% of the tachycardia cycle length by default). As soon the burst delivered, the capacitors begin charging. If the burst is successful (3 of 4 cycles in the sinus zone), the charge is interrupted and the tachycardia painlessly terminated, sparing much of the capacitors’ load. Otherwise, the charge goes on and a minimally delayed shock is delivered. The kind of ATP, whether burst or ramp, and the various characteristics of a standard sequence (for instance the number of cycles) are programmable. One-shot ATP is automatically de-programmed after 4 consecutive unsuccessful attempts. 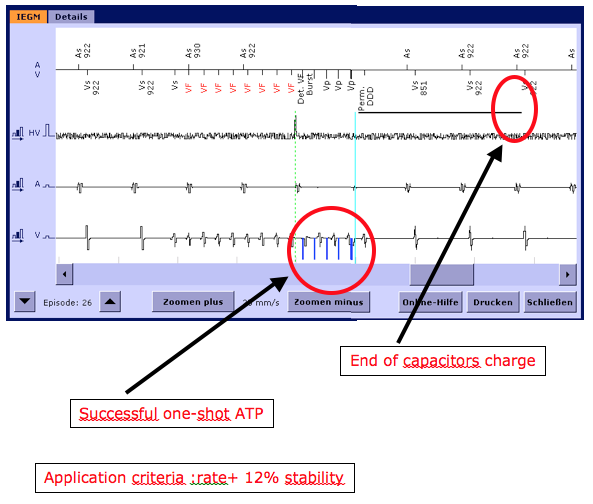