These tracings show the various programming options when a left ventricular quadripolar lead is implanted. Given the multitude of possible configurations, the choice of programming can be complex even if there are a certain number of known fundamentals. In a first step, it appears logical to avoid all configurations associated with phrenic stimulation which is often poorly supported by the patient. Similarly, given the substantial variation in pacing thresholds according to the electrode used, e.g. from a very satisfactory value (<1 volt for 0.4 ms) to values ​​nearing the maximum capacities of the device, it would thus seem advantageous not to select a configuration leading to premature wear of the batteries. A certain number of configurations correspond to these first two criteria (absence of phrenic stimulation, necessity of small pacing amplitude). The hemodynamic criterion could then be taken into account for deciding which configuration to choose. The current literature is rich in terms of publications assessing the impact of the left ventricular pacing site on the degree of response to resynchronization. Unfortunately, the results are controversial and suggest the existence of considerable inter-individual variations without the possibility of defining a same universal optimal site. It seems, however, that an apical position should be avoided, which allows eliminating a certain number of configurations. The 4 electrodes on this type of lead are relatively interspaced: in this patient, the distal electrode (LV1) was positioned in a lateral region whereas the proximal electrode (LV4) was positioned opposite a more apical region (lead positioned in a lower vein continuing into a more basal lateral vein). The electrocardiographic variations are relatively invisible on the lead used for the threshold assessment. In contrast, the 12-lead electrocardiogram found significant changes in the paced QRS pattern according to the chosen configuration. Since the electrical activation is different, it would seem plausible to also envision a different degree of response according to the selected configuration. However, given the absence of a validated method to compare the degree of response to be expected according to the pacing site chosen, it remains very difficult to choose a programming based on a possible superior clinical benefit. The possibility of choosing a pacing site without phrenic stimulation with an acceptable pacing threshold while reducing the risk of dislodgement (possibility of pushing the leads more distally in the vein) probably constitutes the main advantage provided by the quadripolar leads. This likely increases the percentage of patients with effective left ventricular pacing. The new devices allow dual-LV pacing with 2 simultaneously-active ventricular lead electrodes. The clinical value of this type of programming remains to be demonstrated.

In this patient, the selected configuration was LV1/RV coil which allowed obtaining a satisfactory threshold and absence of phrenic stimulation. 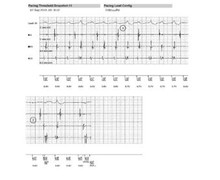 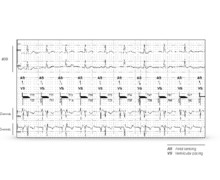 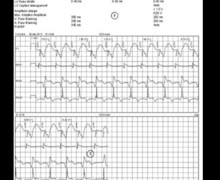