When programming an ICD, particular attention should be paid to the risk of inappropriate therapies. Modern ICD offer several advanced criteria, which, alone or combined, can discriminate VT from SVT. The “heart rate” criterion cannot be used safely alone, as its specificity for the diagnosis of ventricular tachyarrhythmias is only 60%, while its sensitivity can be easily increased to 100%. Moreover, the lower the programmed VT zone, the lower its specificity. Without other discrimination criteria, the therapy will be delivered irrespective of the origin of the tachycardia. The VF zone is typically reserved for very high rate and left without other intervening criteria, which are used only in the VT zone for patients susceptible of developing very rapid ventricular rates during SVT. These criteria should be deactivated in patients with fixed complete AV block.

The discriminating criteria offered by single chamber ICD include sudden onset, stability of the tachycardia cycle length and morphology of the ventricular EGM.

The « sudden onset » criterion withholds therapies for tachycardia of gradual onset, and is typically used to prevent inappropriate therapies for sinus tachycardia. The « stability » criterion limits the delivery of therapy for irregular tachyarrhythmias in the VT zone and is often used to prevent inappropriate therapy for atrial fibrillation with a rapid ventricular rate, which is usually irregular, whereas it is usually regular during VT. “Morphology” is a matching criterion that compares the EGM during tachycardia with that previously recorded during intrinsic rhythm. It is based on the principle that the ventricular EGM should be identical during a rapidly conducted SVT and during sinus rhythm. It compares dynamically ventricular EGM recorded during all episodes of tachycardia in the VT zone with a template previously recorded. If both EGM are classified as similar, the arrhythmia is diagnosed as “supraventricular”.

Onset
Operating details : comparison of an average of the 4 most recent with the average of the 4 previous intervals. As long as the onset is classified as gradual, detection is postponed and the event is marked as VS.

Onset monitor : the device performs all the calculations associated with “onset” though does not delay the detection.
Note : the onset criterion applies to VT and FVT via VT during the initial detection ONLY, and NOT in redetections.

At onset in the VT zone, the device measures each interval. If the onset is detected as gradual, a) the intervals are classified as VS, b) a “gradual onset” notation appears, and c) the detection is withheld.

If the event is classified unstable, a) it is marked as a normal sensed event (VS), b) the VT event counter is reset to 0 and starts ‘Re-Counting’, and c) a "Stability" notation appears.

Wavelet
Operating details : compares the 8 QRS preceding the detection of a tachycardia with a stored template (reference morphology).

Wavelet applies only when the median V-V interval is ≥SVT limit. Wavelet uses EGM 2 : HVA to HVB (Can to RV coil) source. If the printed peak-to-peak amplitude of the R wave is <3 mV, a different EGM 2 source must be chosen. If the base-to-peak amplitude is >6 mV, consider increasing the EGM 2 range.

Operating details:
PERMANENT and SIMULTANEOUS scrutiny of 6 criteria. When the number of intervals (NID) to detect VT or VF is reached, the following diagnostic rules are applied.

PR Logic operates only on initial detection and not on redetection.

PR Logic operates only for rates below the programmed SVT limit. 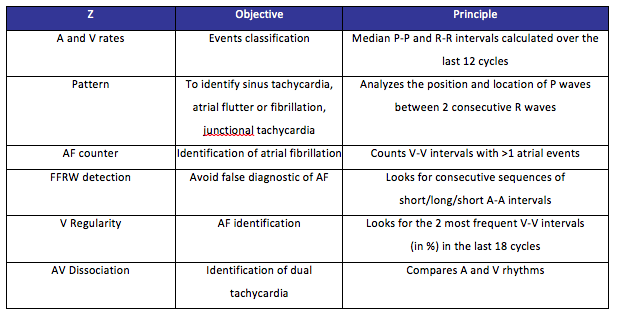 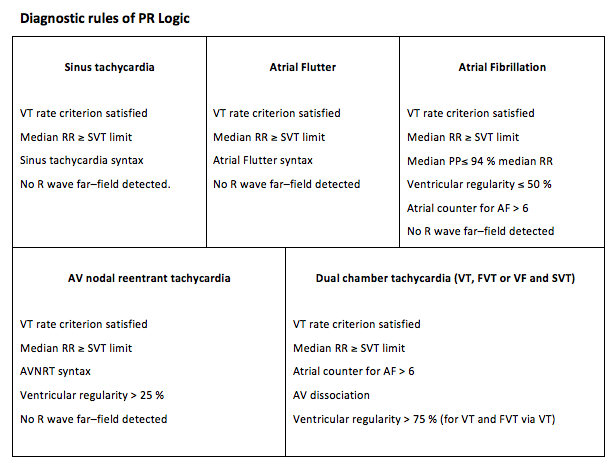 The AF evidence counter analysis determines that an atrial tachyarrhythmia is present if the counter reaches a predefined threshold. Satisfied first at 6, remains satisfied at ≥5, max 10, min 0.

In order to recognize a rhythm as ST with FFRW, it has to be present:

Operating details: AV-dissociation is confirmed if 1 of the following is present in ≥4 of the last 8 V-V intervals:

Operating details:
Calculates the proportion of the 2 most common intervals within the last 18 V-V intervals.

Note: Only intervals ≥240 ms in duration are used in this analysis. 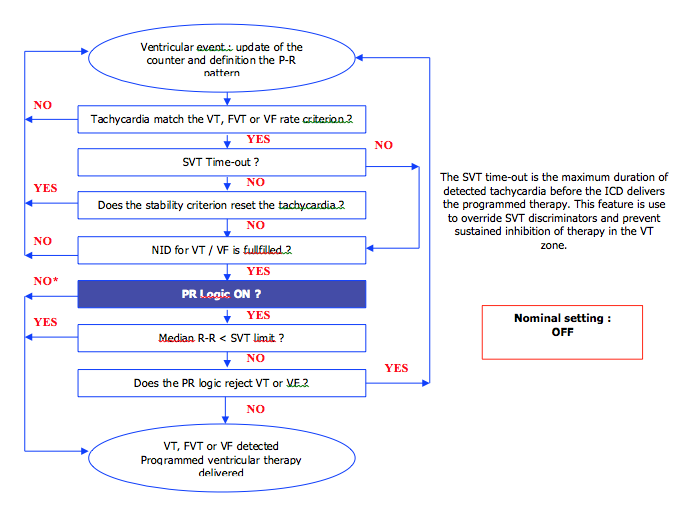 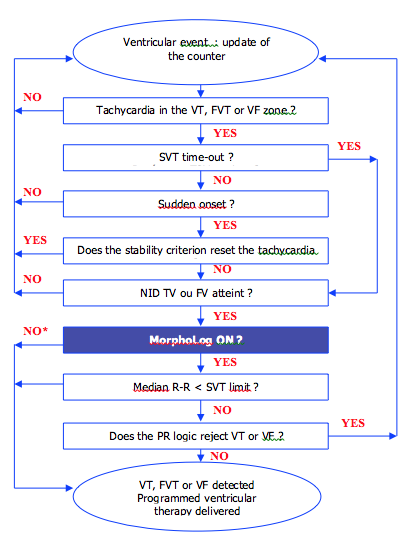 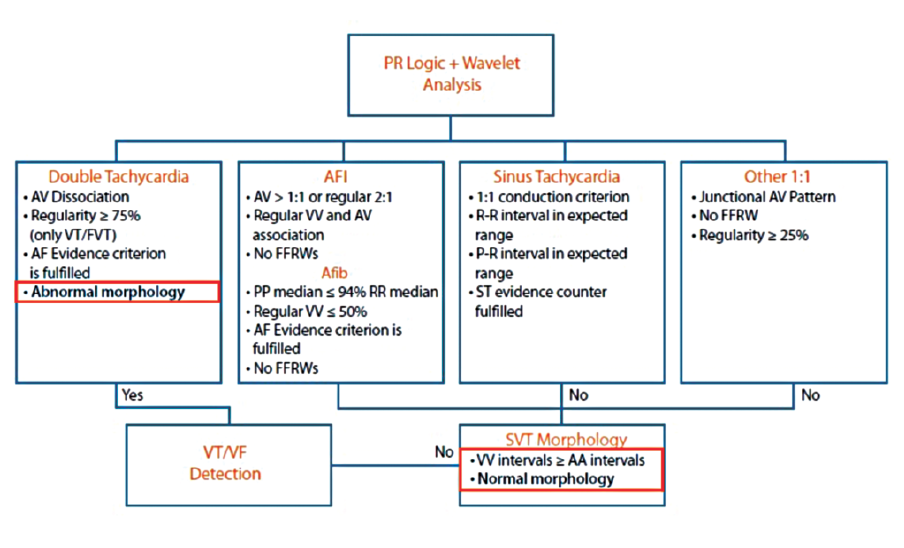