The strength of the pacing pulses in each cavity hinges on their individually programmed amplitude and duration. While these values can be manually programmed, the “Capture Management” function can be applied to manage the pacing outputs in the atrium and ventricle. This function presumes that the device is able to recognize the efficacy versus inefficacy of a given pulse output amplitude.

At programmable time intervals (e.g. at 1 a.m.), the pulse generator measures the capture threshold to determine the lowest pulse amplitude, combined with the shortest duration, which consistently captures the myocardium. When verifying the capture threshold, the pulse generator prepares for a search, carries out the search and measures the threshold. Over time, these measurements are used to construct a curve of its trend.

The follow-up measurements of the capture threshold are scheduled when no other pending features have a higher priority, starting with a device interrogation to determine whether some programmed settings might interfere with its search. For example, the permanently programmed pulse amplitude or duration may not exceed the 5-V or 1-ms limits, respectively, in each of the right heart cavity. In case of unsuccessful measurement, no further attempt to find a capture threshold is scheduled until the following day.

During the acute phase, i.e. the period of lead maturation following its implantation, the pacing output may be adjusted, though not below the nominal 3.5 V or 0.4 ms, respectively, or below the last manually programmed output settings.

Right ventricular (RV) capture management (CM) is available when the device operates in DDD(R), DDI(R), MVP [AAI(R)<=>DDD(R)] or VVI(R) modes. If MVP is the programmed pacing mode, the pacemaker functions temporarily to DDD (R) mode during the search of capture threshold. RVCM can only be launched at rest during a stable cardiac rhythm. The device performs a search for the RV pacing threshold amplitude at a fixed pulse duration of 0.4 ms. RVCM varies the strength of the pacing pulse to find the lowest amplitude that consistently captures the RV myocardium. The device confirms the capture when it senses a signal in response to the test pulse.

The search for the capture threshold begins at a test amplitude 0.125 V below the last measured value. In absence of prior search, the first test amplitude is 0.75 V, which is then decreased in 0.125-V steps until a test amplitude is classified as below the pacing threshold. The pulse strength is then increased in 0.125-V steps until a same test amplitude has been classified as above the pacing threshold 3 times consecutively, defining the RV capture threshold. A backup pulse is systematically delivered 100 ms after each test, whether or not the test pulse captured the myocardium. The test pulse is delivered at the programmed amplitude and a duration of 1.0 ms.

When RVCM is set on Adaptive, the device automatically adjusts the pacing output to guarantee a capture with a high enough safety margin. When set on Monitor, no adjustment occurs and the data collection is limited to the trend of the pacing threshold. The target amplitude relies on the programmed settings for the “RV Amplitude Safety Margin” and the “RV Minimum Adapted Amplitude” parameters. After a successful search of the capture threshold, the device calculates a target amplitude by multiplying the programmed RV Amplitude Safety Margin by the threshold amplitude measured at a pulse duration of 0.4 ms.

This adaptation can only be accomplished in a range of outputs defined by a programmable inferior limit (Minimum Adapted Amplitude parameter) and a superior threshold limit of 5.0 V and 1.0 ms. The minimum pulse duration for the management of the ventricular threshold is 0.4 ms.

Atrial capture management (ACM) is available when the pacemaker operates in DDD or DDD(R) and the MVP [AAI(R)<=>DDD(R)] modes. If the programmed pacing mode is MVP, the device switches temporarily to DDD(R) mode for the duration of the pacing threshold search.

Before the launch of a pacing threshold search, the pacemaker examines whether the patient is being paced or whether it is sensing a slow heart rate. A slow heart rate is desirable during the search of a pacing threshold, to lower the risk of competition between forced pacing and rapid intrinsic rhythms. An atrial capture threshold search is carried out when a stable atrial rhythm has been observed for 8 paced cycles and the sensor-indicated rate is slower than the AQ rate (sensor rate).

The pacemaker searches for the pacing threshold in a series of support cycles followed by a pacing test at a slightly faster rate. Beginning at an output 0.125V below the last measurement (or 0.75 V in absence of previous search), the amplitude is lowered in 0.125 V/ 0.4 ms steps until the device senses loss of capture. ACM monitors the synchronization of the sensed P and R waves (instead of an evoked response) to determine the occurrence of capture.

ACM automatically selects one of the following 2 methods to evaluate atrial capture based on the patient’s rhythm at the time of the pacing threshold search:
1) if the patient is in normal and stable sinus rhythm, the device chooses the Atrial Chamber Reset (ACR) method, or 2) if not, it selects the AV Conduction (AVC) method. The ACR method, which requires a stable sinus rhythm, evaluates capture by observing the intrinsic rhythm response to the test atrial pulse. If the latter fails to capture, the sinus node is not reset and an atrial event that follows the test pulse occurs within the atrial refractory period. In absence of atrial event sensed in the refractory period during the AV delay, ACR determines that pacing has captured the myocardium. 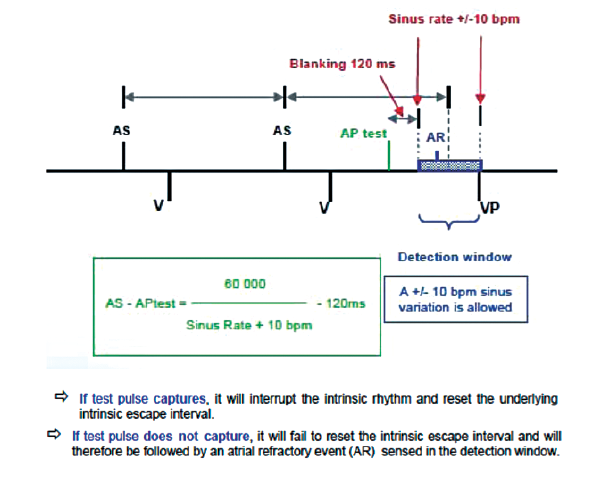 The AVC method is applied when stable 1:1 AV conduction is observed during atrial pacing. The atrial pacing rate increases by 15 bpm (without, however, exceeding 101 bpm) and the AV delay is extended in an attempt to obtain a stable AP-VS rhythm. AVC evaluates capture by observing the conducted ventricular response to the test atrial pulse. Each atrial stimulus is followed by a backup pulse at a programed amplitude and 1.0 ms duration to maintain a stable rhythm for the entire duration of the test. When a conducted ventricular event is sensed at approximately the anticipated AP-VS interval in response to the test atrial pulse, AVC determines that pacing has captured the myocardium. 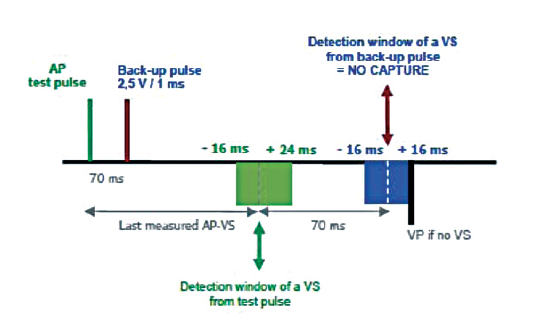 A pacing threshold search begins at a test amplitude 0.125 V below the last measurement. In absence of such, a new search begins at an amplitude of 0.75 V. The device keeps lowering the pulse strength in 0.125 V steps until it reaches a test amplitude that is below the capture threshold. The test pulse is then increased in 0.125 V steps until a same test amplitude has been classified as above the pacing threshold 3 times consecutively, defining the RA capture threshold. The target amplitude is based on the programmed settings for the Atrial Amplitude Safety Margin and the Atrial Minimum Adapted Amplitude parameters.

Capture Management does not program atrial outputs >5.0 V or 1.0 ms. If the patient needs a higher pacing output, the amplitude and pulse width must be programmed manually.

The amplitude of the cardiac depolarization signals are not stable and might vary as a function of activity, use of medications, or metabolic changes. In addition, the amplitude of signals associated with atrial or ventricular arrhythmias might differ markedly from normal signals, often considerably smaller, as in the case of atrial fibrillation. Thus, a fixed sensitivity does not assure the detection of all events.

Depending on the age of the pacemaker series, from Kappa, EnPulse, Sensia, up to the Adapta model, a fixed sensitivity value might be programmable for the entire duration of the cardiac cycle. Alternatively, in Ensura, Advisa and later pacemaker series, as exists in the pulse generator of defibrillators, automatic sensing is adapted to the amplitude of the previous signal, and changes throughout the cardiac cycle.

Automatic sensitivity in older pacemaker series, from Kappa, EnPulse, Sensia up to Adapta

The amplitude of each spontaneous P or R wave is measured and compared with a safety interval, which varies according to a) the ambient sensitivity, b) the lead, whether atrial or ventricular, and c) the lead polarity.
The signal amplitude is then classified as large, adequate or low. 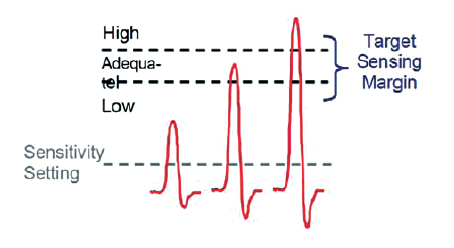 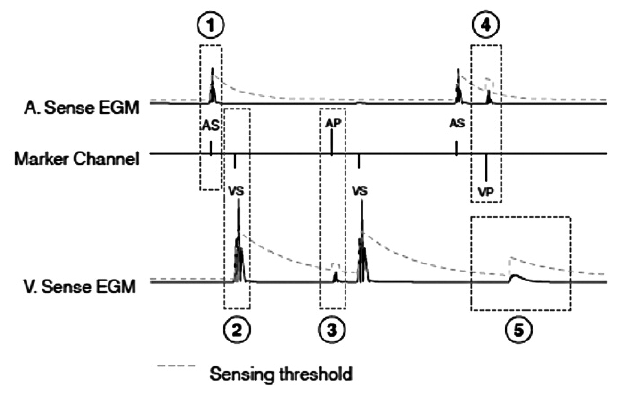 After a ventricular sensed event, the threshold value is adjusted to 75% of the R wave, up to a maximum of 8 folds the programmed value, then decreases over 450 ms to reach the programmed sensitivity (for example 0.9 mV).

After a ventricular paced event, the sensitivity to ventricular events remains unchanged and the device is less sensitive to atrial events.

After an atrial sensed event, the threshold value is adjusted to 75% of the wave, up to a maximum of 8 folds the programmed value, then decreases over 200 ms to reach the programmed sensitivity (for example 0.3 mV).

After an atrial paced event, the sensitivity to atrial events remains unchanged and the device is less sensitive to ventricular events.

After the post-pace blanking period, the device is temporarily less sensitive to ventricular events (for example 120 ms).