In standard practise, a VF-zone was conventionnaly programmed starting at 188-200 bpm with immediate high-energy shock as first therapy. Many ventricular arrhythmias, with short cycle lengths <320 ms and labeled as VF, actually are rapid monomorphic VTs. Concerns about lack of efficacy, risks of acceleration in life-threatening arrhythmias and syncope due to delay of therapy have precluded empirical programming of anti-tachycardia pacing in the VF zone. However, if cardioversion shocks are effective in interrupting fast monomorphic or polymorphic VTs, they are painful, drain the battery and overtreatment with ICD shocks is consistently associated with significant detrimental impact on patient mental and physical well-being. Reports of anxiety syndome, depression, and poor quality of life are common in patients affected by the occurrence of multiple painful shocks. Reducing shocks to improve quality-of-life scores, to decrease discomfort, pain and anxiety and to increase ICD acceptance now appears as a priority for optimal programming.

The PainFREE Rx II trial (a prospective, randomized, multicenter study) demonstrated that ATP was, with a single empirical ATP attempt (8 beats at 88%), highly effective in treating fast VT, significantly improving the quality of life and reducing the relative number of shocks without any clinical difference in episode duration, arrhythmic syncope, acceleration, or sudden death.

Anti-tachycardia pacing can be considered as safe and effective, promotes less pain and better quality of life, prolongs the battery longevity and therefore should be recommended as the first-line therapy for fast VT in the VF zone with a high chance of arrhythmia termination and minimal delay in therapies.

Subsequently, device manufacturers have developed algorithms with subtle specificities to deliver a limited number of ATP sequences before or during the charge in the VF zone. The major advantage of an ATP delivered during the charge is that it provides one attempt to interrupt the tachycardia without potentially delaying the shock if ATP fails to terminate the arrhythmia. In contrast, it causes battery depletion nearly equivalent to a shock. ATP delivered before the charge prevents battery depletion but there is in some specific patients a fine balance between the risk of excessive shocks and the risk of delaying therapies with potential clinical consequences and poor ability to tolerate ventricular arrhythmias. According to the manufacturer, there is a possible switch from ATP during charging to ATP before charging if burst pacing therapy successfully terminates the arrhythmia.

Multiple factors may affect the efficacy of ATP and may be programmed according to the manufacturers. Regarding optimal ATP programming for very fast VT, a burst (greater effectiveness and a lower incidence of acceleration with one burst over one ramp) with 8 to 15 beats (no superiority of a 8- versus 15-beats train), quite long cycle length (88% of the VT cycle length compared to shorter ones for slower VTs) and with left ventricular or biventricular pacing in patients implanted with a CRT device may improve efficacy.

Once the diagnosis of VF is confirmed, the device delivers a burst of ATP (8 stimuli at a cycle length corresponding to 85% of the tachycardia cycle length by default). The tachycardia, first of all, must be regular (≤12% stability threshold). As soon the burst is delivered, the capacitors begin charging (burst before charge). If the burst is successful (3 of 4 cycles detected in the sinus zone), the charge is interrupted sparing partially the capacitors’ load. Otherwise, the charge goes on and a minimally delayed shock is delivered. The kind of ATP, whether burst or ramp, and the various characteristics of a standard sequence (for instance the number of cycles) are programmable. One-shot ATP is automatically de-programmed after 4 consecutive unsuccessful attempts.

The ventricular rate must be <250 bpm (based on an average of the 4 preceding cycles) for a burst to be delivered. The burst is only used as a first attempt at treatment of an episode. Once the burst has been delivered, the device analyses the rhythm: if the arrhythmia persists, the capacitors begin to charge (burst before charge); if the arrhythmia has ended, the charge is withheld.

The device applies the following criteria to examine the efficacy of the burst:

After an unsuccessful burst, the charge onset marker appears on the tracing 300 ms after the charge has effectively started. The charge begins on the second fast cycle, though the marker may sometimes not be visible before the third. 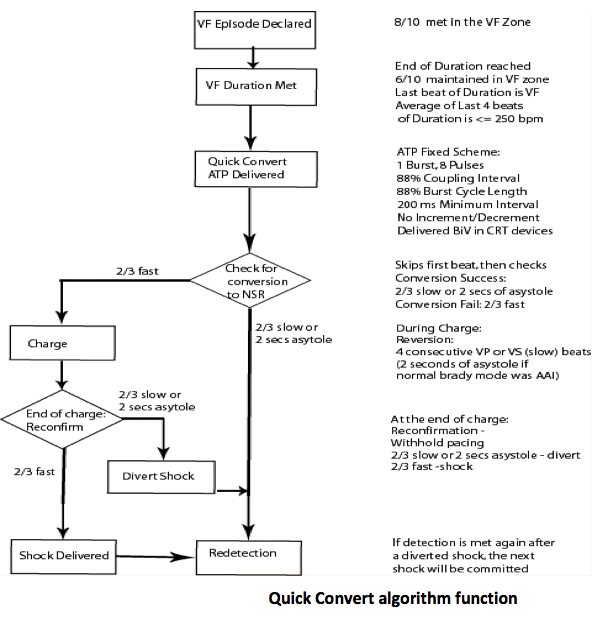 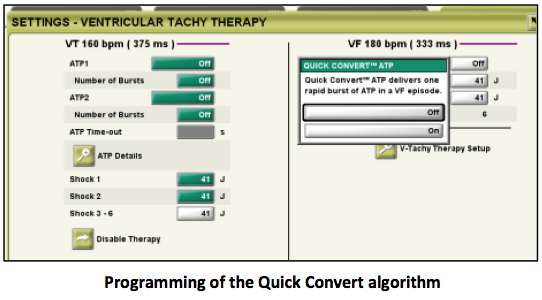 If the ATP parameter is set to During Charging (nominal), the device delivers a single sequence of ATP therapy when it starts charging for the defibrillation therapy. If charging completes before the

If the ATP parameter is set to Before Charging, the device delivers a sequence of ATP therapy as soon as VF is detected. If VF is redetected, the device begins charging and delivers a second ATP sequence.

The device does not deliver ATP therapies before or during charging unless the last 8 ventricular sensed intervals are all greater than or equal to the programmed value for theparameter called “Deliver ATP if last 8 R-R >=”.

Successful termination of an episode detected as VF:

Three features can automatically change the value of the ATP parameter:  ChargeSaver, Switchback and Smart Mode.

If the ChargeSaver option is programmed to On, the device can automatically switch from ATP During Charging operation to ATP Before Charging operation. This change occurs when ATP has successfully terminated the detected tachyarrhythmia on a programmable number of consecutive attempts during charging.

Operation of ChargeSaver and Switchback: 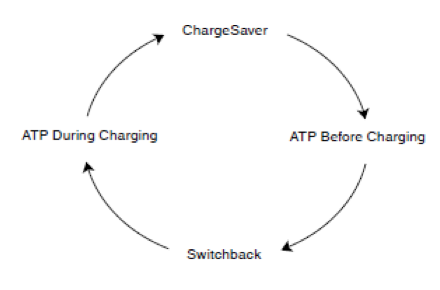 If the Smart Mode feature is programmed to On, the device automatically sets the ATP parameter to Off if ATP therapies delivered before or during charging fail to terminate the tachyarrhythmia in 4 consecutive episodes.

Characteristics of ATP During and Before Charging are programmable: 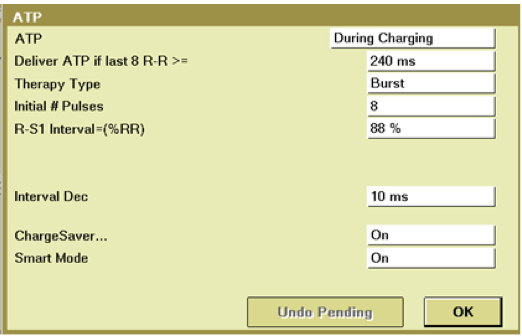 The latest ICDs enable the programming of a salvo in the VF zone, before or during the charge of the capacitors.

ATP before the charge: once the diagnosis of VF is confirmed, ATP is delivered. If VF is re-confirmed after ATP, the capacitor begins charging. If the arrhythmia has been terminated, the charge is withheld, which saves energy. However, unsuccessful ATP delays the shock delivery by a few seconds.