Various arrhythmia discrimination algorithms can be programmed with a view to increase the specificity and lower the rate of inappropriate therapies:

In the contemporary devices, the discriminators can be programmed in either or both VT zones but not in the VF zone.

The presence of an atrial lead enables an uninterrupted comparison of the ventricular rate with the atrial rate. This comparison is the first applicable discriminator in dual and triple chamber defibrillators, though evidently not with a single chamber device.

This setting can be programmed on dual or triple chamber defibrillators by selecting Rhythm ID or Onset/Stability.

V rate > A rate is not evaluated during the redetection following the delivery of ATP.

This discriminator is available on the platforms of single, double and triple chamber defibrillators by selecting the Rhythm ID option. It compares, during the initial detection of a tachyarrhythmia, the conduction vector (morphology and EGM synchronization) with a reference EGM recorded during normal sinus rhythm. 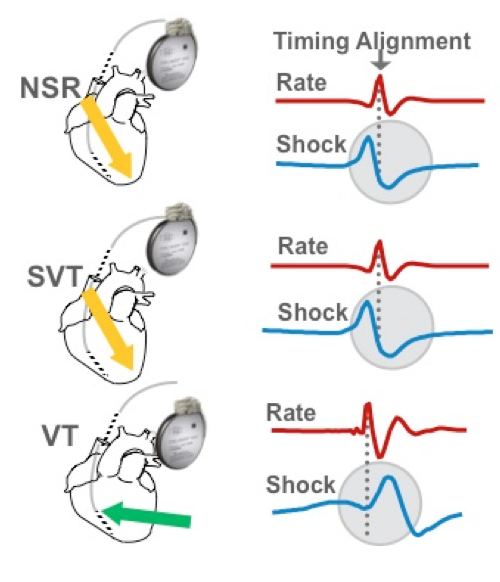 The shock electrogram is used for comparison, the near field being used for the alignment. The comparison between the reference EGM and the EGM during tachycardia is calculated from the amplitudes of eight-time prescribed comparison points (shock channel).

When a rapid rhythm is detected, the device measures the correlation between the waveform of each ventriculogram detected with a recorded reference template and classifies each cycles as correlated or non-correlated.

Correlation of each beat starts only after the third fast beat occurs. The following beats are immediately classified:

If a beat’s correlation classification is known, it is included in the 10 beats used to classify the rhythm and determine the RhythmMatch value. 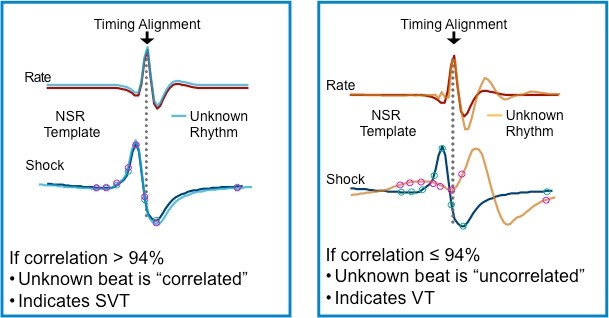 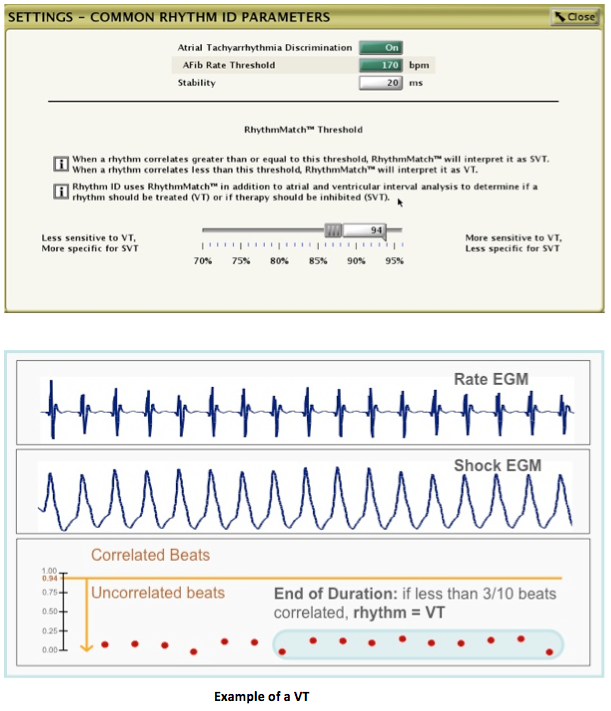 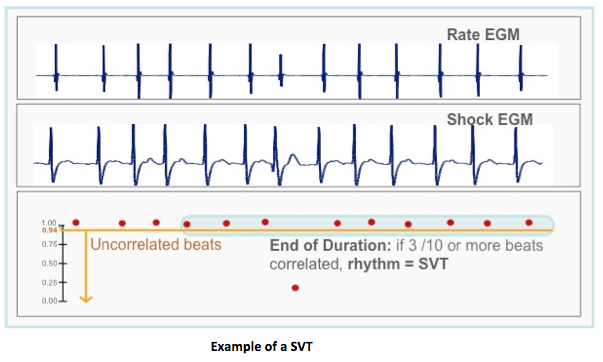 This discriminator is available with single, dual and triple chamber defibrillators by selecting the Rhythm ID or Onset/Stability options. It can be applied to:

This discriminator is available with single, dual and triple chamber defibrillators by selecting the option Onset/Stability. It is intended to inhibit the treatment of ventricular tachyarrhythmias in the slowest rate zone when the rate increase is gradual. It is limited to the slowest zone of a multizone configuration. 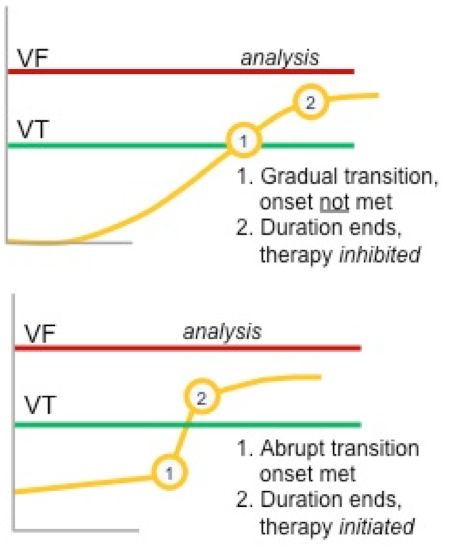 When a detection window is satisfied, the pulse generator starts the calculation of sudden Onset in two consecutive stages.

If both stages declare that the rhythm onset was sudden, treatment can be delivered. If one of the two stages indicates a gradual onset, the initial ventricular therapy is inhibited in the slowest zone. The treatment is not inhibited by Onset if the rate accelerates toward a faster ventricular zone.

If V is faster than A, indicates ventricular rhythm and initiates therapy

At end of SRD timer, therapy is provided

This discriminator is available with single, dual and triple chamber defibrillators by selecting the Rhythm ID or Onset/Stability options. It allows the delivery of programmed ventricular therapy after a programmable duration (based on a clock) even if the other discriminators are in favor of a supraventricular origin of the arrhythmia. SRD can be programmed for the VT and VT-1 zones separately, and an independent post-shock SRD value can be programmed.

These different discriminators can be combined with a view to optimize the discrimination of the arrhythmias origin. 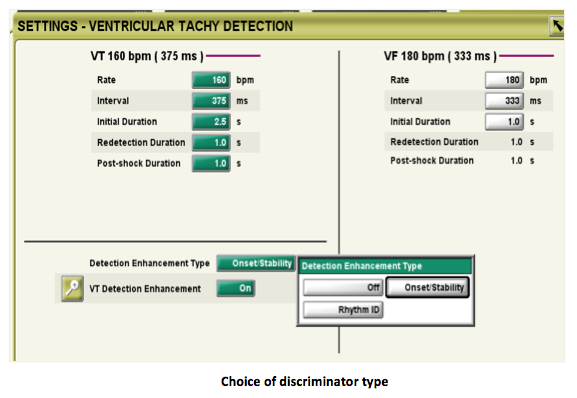 When atrial tachyarrhythmia Discrimination is programmed on OFF, the vectors’ correlation is applied for the initial detection and stability for the post-shock detection.

When all these discriminators are active, the device proceeds in different stages: 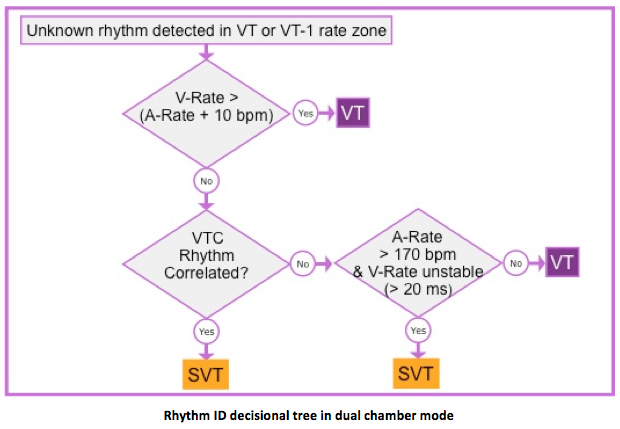 This option enables the combination of several discriminators assuming the presence of a properly functioning atrial lead, including AFib Rate Threshold, V rate > A rate, Onset and Stability. These combinations are only available for the initial detection.

With a single chamber defibrillator, when Onset and Stability are programmed, two options are available: 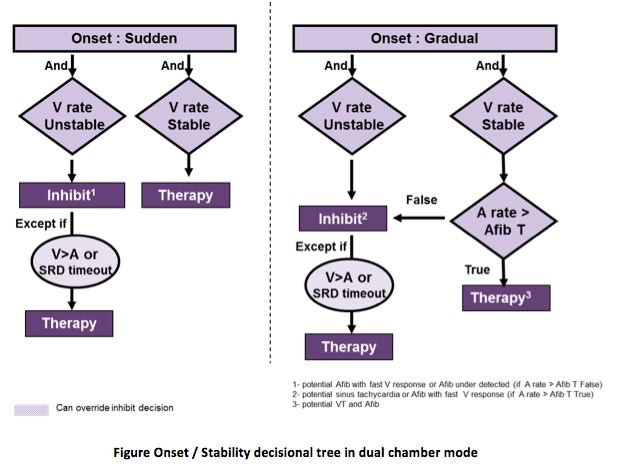 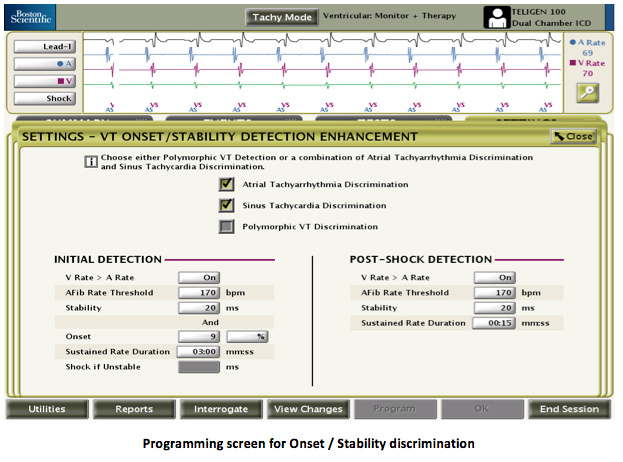