The discrimination by single chamber Biotronik devices is based on an analysis of the arrhythmia onset and the stability of the rhythm. The diagnosis of VT is based on observation of a sudden onset and a stable rhythm.

The average of the last 4 RR intervals is compared with the average of the next 4 RR intervals. The calculation is made on 8 sliding cycles, and the criterion is fulfilled when the difference between the 2 averages is greater than the programmed “sudden onset”, which, by default, is set at 20%. When the sudden onset criterion is verified, it remains valid for all episodes, including for redetections.

The SMART algorithm applies several criteria to discriminate VT from SVT, including the atrial and ventricular rates, the atrial and ventricular rate stability, the multiplicity, i.e. the n:1 A and V ratio and the presence or absence of sudden onset of the arrhythmia. Depending on the analysis of these criteria, the arrhythmia is classified as VT or SVT. For each interval corresponding to a VT zone, the discrimination algorithm undergoes a series of analyses to conclude to a diagnosis of VT versus SVT. An interval classified as VT is labelled VT1 or VT2 depending on the zone of rate in which it belongs. An interval classified SVT is labelled “AFib” for atrial fibrillation, “AFlut” for atrial flutter, SinT for sinus tachycardia, or 1:1 for atrial tachycardia.

The SMART algorithm uses sliding windows of 4 cycles in the atrium and in the ventricle to compare these 2 rhythms, which determines whether the ventricular rhythm is faster, identical or slower than the atrial rhythm. For each new interval, the average is recalculated by eliminating the first 4 previous cycles. This analysis is key because, if the ventricular rhythm is found to be faster than the atrial rhythm, the device diagnoses VT without further discrimination.

Criterion of RR and PP stability

While stability is independently determined and programmed in the atrium and the ventricle, the default is 12% in the atrium. An interval is considered stable when the difference between this and the 3 previous intervals is not longer than the programmed value.

The function is the same as that described for single chamber defibrillators, with a default value = 20%.

To determine whether atrial flutter with n:1 conduction is present, the defibrillator looks for an n:1 ratio between atrial and ventricular rhythm. A multiplicity (n:1 ratio) is present when the average atrial rate is a multiple of the average ventricular rate (with a 12-ms tolerance).

Criterion of regularity of the PR interval

A PR interval is classified regular if the difference between its duration (PR1) and the duration of the 3 previous PR intervals (PR2, PR3 and PR4) is not greater than the programmed value (6% by default, corresponding to half the stability value). 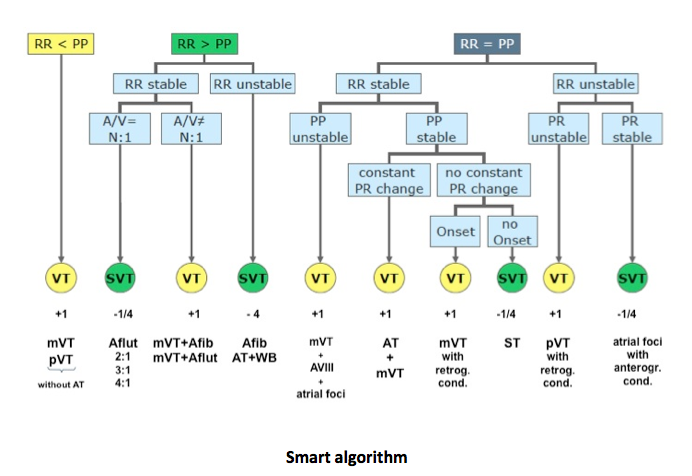 The easiest case of AV discrimination: diagnosis of VT based on a comparison of rates, the ventricular rate being faster than the atrial rate.

Differentiation between dual tachycardia (VT+flutter) and conducted atrial flutter is difficult for an algorithm that does not include a morphology criterion. For both, RR intervals > PP intervals and RR intervals are stable. The device analyzes the relationship between atrial and ventricular signals. If there is a N:1 relationship (2:1, 3:1 or 4:1 with a 12 ms tolerance), the ventricular interval is classified as an atrial flutter beat and labeled with an AFlut marker. This interval will decrement the VT counter by -1.

If the multiplicity cannot be established, a VT with concurrent atrial tachycardia or atrial fibrillation is identified. Each beat will be marked with a VT marker

The algorithm identifies six different classification pathways when the atrial and ventricular rates are considered equal.

When the algorithm identifies equal atrial and ventricular rates, the algorithm tests stability in both chambers. If the ventricle is stable and the atrium is unstable, the algorithm concludes that the rhythms are disassociated (stable VT with unstable atrial arrhythmia).

When atrial and ventricular rhythms are stable and similar in rate, several different rhythms may exist.

If an AV trend exists, (i.e., successive AV intervals are present in strict increasing or decreasing length), the atrial and ventricular rhythms are close in rate, but can be considered independent. The small but consistent difference between the atrial and ventricular rate causes the AV interval to gradually shrink or expand over time: diagnosis of dual tachycardia (branch 6).

When atrial and ventricular rates are similar and stable with no AV trend, the algorithm uses Onset to differentiate VT with 1:1 retrograde conduction (branch 7) from sinus tachycardia (branch 8). Intervals classified as Sinus Tachycardia are labeled with a SinusT marker and will decrease the VT counter by (‑1/4).

The algorithm identifies polymorphic VT with retrograde conduction when atrial and ventricular rates are equal, both chambers are unstable, and the AV interval is irregular.