One of the most common causes of oversensing and resultant inappropriate shocks is lead fracture. A systematic approach to the patient with suspected lead failure includes:

Loosened setscrew or header-connector problems (incomplete contact between the lead pin and header) have very similar presentations as a lead issue: lead impedance may be abnormally high and aspects of the oversensed electrograms can be similar. However, X-ray (magnified view directly over the pulse generator) may demonstrate an improper positioning of the pin connector in the header (pin coming out from the header). Moreover, connector problems tend to present acutely with a short interval from surgery to impedance rise or oversensing (within hours or days after the procedure) whereas lead failure usually manifest later except in cases of procedural damage. Manipulating the device inside the pocket may reproduce oversensing if there is a loose connection.

Other atypical situations may replicate the combination of abnormal impedance and/or oversensing of fast non physiological signals: header seal-plug problems with a specific aspect of sensed signals corresponding to the intervals between air bubbles escaping from the seal plug and lead to lead mechanical interaction (contact between the RV lead and an abandonned lead fragment or uncapped lead).

The differentiation between these different diagnoses to avoid overdiagnosis of lead fracture is sometimes difficult but may have important clinical implications since revision of the high voltage lead may not be requirred.

There are no specific dedicated algorithms to prevent delivery of inappropriate therapies in case of lead dysfunction in Biotronik, Boston Scientific or Microport CRM-Sorin devices.

Two different algorithms can be programmed to prevent inappropriate therapies in case of lead dysfunction.

The aim of this algorithm is to identify oversensing due to noise artifacts and withhold the delivery of unnecessary therapy. The RV Lead Noise Discrimination feature compares the amplitude of the signals in the far-field (EGM2 channel) versus near-field channels to differentiate RV lead noise from VT/VF. The amplitude is measured peak-to-peak using the far-field EGM. The algorithm uses a counter. Every sequence of 12 peak-to -peak amplitudes is analyzed through a sliding window. When the number of intervals to detect VT or VF is reached, if 3 of the 12 last sequences are classified as « noise », the detection is interrupted, therapies are withheld and an RV Lead Noise alert is triggered (the device sounds a patient an alert tone repeated every 4 hours until the device is interrogated by a programmer). If the Patient Home Monitor alert for the RV Lead Noise alert is programmed to On, the device also attempts to send a wireless transmission to a CareLink Monitor.

Inappropriate therapies for lead dysfunction may be preceded by abrupt changes in lead impedance and short episodes of oversensing. The Lead Integrity Alert feature has designed to provide advance warning of a potential RV lead dysfunction by monitoring the RV bipolar and RV tip-to-coil lead impedance, the frequency of rapid non-sustained ventricular tachyarrhythmia (High Rate-NS) episodes, and the frequency of short ventricular intervals counted on the Sensing Integrity Counter. It identifies a potential lead fracture if at least 2 of the following criteria have been met within the past 60 days:

1) The RV pacing lead impedance measurement for either polarity is less than 50% or greater than 175% of the baseline impedance. The baseline measurement is the median of the previous 13 daily measurements. The RV bipolar and RV tip-to-coil impedance measurements are taken at the same time each day. 2) The ventricular Sensing Integrity Counter (short ventricular intervals ≤130ms) is incremented by at least 30 within a period of 3 consecutive days or less. 3) The device senses 2 high rate-non sustained episodes with a 5-beat average R-R interval of less than 220 ms.

When a lead dysfunction is suspected, the algorithm triggers a Medtronic CareAlert Notification, alerts the patient (audibly warning of the patient every 4 hour until a caregiver resets the ICD) and triggers real-time adjustment of tachyarrhythmia detection settings to limit unnecessary shocks (reprogramming of the number of intervals to detect VF to 30/40).

SecureSense™: discrimination of noise on the ventricular lead 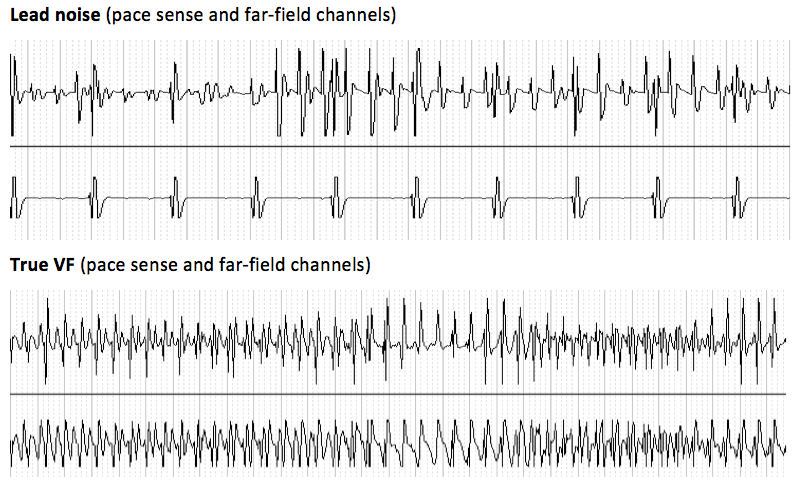 The supplemental SecureSense™ discrimination channel is activated after the sensing of 2 out of 3 cycles in the VT or VF zone. A counter is incremented with each short cycle sensed on that channel. If the discrimination channel senses short cycles (which are directly labelled VS² on the tracing), the counter is zeroed after each pair of cycles. At the time of diagnosis, if this counter is ≥10, therapy is inhibited. The counter is re-evaluated with each re-detection and before the delivery of a shock. It is de-activated after the first therapy.

Programming of the SecureSense algorithm