Defibrillators were originally developed to terminate life-threatening ventricular arrhythmias with an electrical shock. Cardioversion, which consists of delivering a low-energy shock synchronized to the upstroke of the R wave of an EGM, is distinguished from defibrillation, which consists of delivering a non-synchronized, high-energy shock. In the VF zone, synchronization of the shock may not be possible because of instability of the ventricular electrograms. In practice, defibrillators from the different manufacturers attempt to synchronize the shock to the R wave, including in the VF zone.

The effects of an electrical shock vary as a function of the energy delivered. Low energies, on the order of 1 J, delivered in the vulnerable period may induce an arrhythmia. The upper limit of vulnerability, a value correlated with the defibrillation threshold, is the lowest energy delivered in the ventricular vulnerable period that does not trigger VF. The probability of arrhythmia termination increases thereafter along an exponential curve as a function of the amplitude of the shock delivered, when synchronized with the R wave. Above a certain value, the risk of re-inducing an arrhythmia increases as well, thereby limiting the chances of therapeutic success. A shock of excessive amplitude may injure the myocardium.

The stored energy subsequently delivered by a defibrillator is expressed by the formula:

Various characteristics of the shock waveform, shock vector, shock amplitude and number of shocks delivered determine the success of defibrillation and may or may not be programmable.

Several variables pertaining to the shock waveform, its polarity, vector and amplitude, and the number of shocks delivered are programmable according to the manufacturers.

After a long history of monophasic configuration, a biphasic shock waveform, which lowered the defibrillation threshold, was introduced. The first phase of a biphasic shock is equivalent to that of a monophasic shock, though with a lower critical mass; the second phase brings the membrane potential back to as near to zero as possible, in order to prevent the re-induction of VT or VF. The shock waveform can be programmed in some devices to be mono- or biphasic; however, the nominal waveform is always biphasic and should not be changed.

In the VF zone, the strength of the first and subsequent shocks is usually programmed at the highest value the device is able to deliver. Programming of the defibrillation shock amplitude can be guided by the defibrillation threshold, defined as the least amount of energy that converts VF to sinus rhythm.  According to the specific manufacturer, the amplitude corresponds to the delivered or the stored amount of energy.

the shocks delivered by Abbott ICD can be programmed to be mono- or biphasic (the nominal waveform is biphasic).

the nominal polarity of Abbott ICD is anodal. In any given patient, the shock polarity is programmed either anodal or cathodal; the polarity cannot be changed during the delivery of a series of shocks.

Tilt and duration of the phases of a biphasic shock

At a fixed tilt (nominally 65% for each of the 2 phases), the shock is interrupted when the residual capacitor voltage has reached a fixed percentage. The measured pulse duration is a function of the impedance, while the energy delivered is fixed. The tilt of both phases is the same. The optimal duration of the second phase depends on a) the duration of the first phase, b) the defibrillation impedance and c) a membrane time constant. In presence of a high defibrillation threshold, it is not advised to change the tilt (50% for each phase, for example). However, if the defibrillation threshold and impedance are both high, one can optimize the duration of both phases and reprogram a fixed pulse duration. A high impedance indicates an impediment in the transmission of current. Therefore, to deliver a same amount of energy, a long pulse duration is needed, incurring a risk of hyperpolarisation and loss of energy. Consequently, it is preferable to limit the pulse duration. Depending on the measured impedance, the ICD suggests a series of optimal durations in 3 colors: blue corresponds to a typical time constant, green to a more rapid constant, and yellow to a slower time constant.

It is noteworthy that defibrillation impedance can be measured at the time of electrical shock delivery for treatment of a ventricular arrhythmia, or during low-voltage shocks, as the latter measurements are close to the actual values (<10% of variation).

In the VF zone, the highest number of consecutive shocks is fixed at 6.

The programming of shock polarity and waveform in the VT versus VF zones cannot be different.

Shock wave configuration, tilt and duration of the phases of a biphasic shock

The initially monophasic waveforms became biphasic in more recent defibrillators. In Biotronik devices, the voltage-controlled biphasic shock is a 60/50 fixed-tilt shock. The tilt of the first phase is 40% meaning that 60% of the initial voltage is delivered during the first phase (fixed tilt at 60). The cut-off voltage of the second phase is 20%, meaning that 50% of the remaining voltage (40%/2) is delivered during the second phase (tilt at 50). The delivered voltage is constant, and the duration of each phase varies depending on the shock impedance, i.e. increasing as the impedance increases.

A second shock wave can be programmed (biphasic II, voltage/controlled pulse duration). The voltage load is 100% and the tilt of the first phase is 40%. The cut-off of the second phase occurs after a fixed, 2-ms pulse duration. This can be programmed in patients whose defibrillation threshold is high, particularly when treated with amiodarone, which may increase the choronic defibrillation threshold.

The shock polarity can be set on normal, reversed or alternating. With a single coil lead, a normal polarity for Biotronik defibrillators means that the shock is delivered between the can, as the anode, and the right ventricular coil as the cathode. With a reversal of polarity, the right ventricular coil becomes the anode, which inverses the 2 phases of a biphasic shock (negative first phase and positive second phase). With a dual coil lead and a normal polarity, the shock is delivered between the can and the distal, right ventricular apical coil and between the proximal shock coil in the superior vena cava and the distal right ventricular apical coil. With reversed polarity, the current direction is opposite. When the polarity is set on alternating, the first shocks’ polarity is normal, then alternates between normal and reversed after the delivery of a first shock of maximum energy. 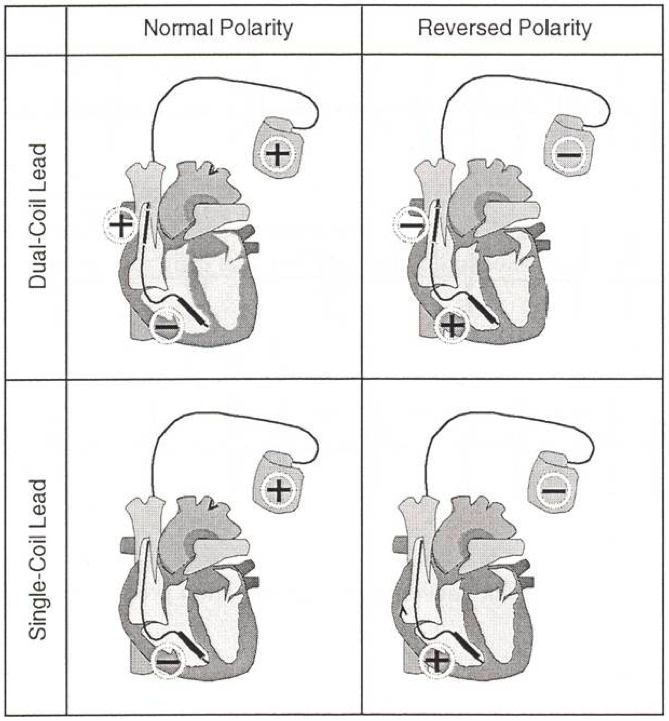 The Active Can/SVC Coil parameter and the Pathway parameter specify the electrodes and direction of current flow for defibrillation and cardioversion pulses.

The Active Can/SVC Coil parameter has the following settings:

In the VF zone, up to a maximum of 6 consecutive shocks can be programmed.

The device attempts to synchronize it to a nonrefractory ventricular event that meets one of the following conditions:

The shock waveform is necessarily biphasic and is not programmable with the latest Boston Scientific defibrillators.

The following programmable configurations are available with a double-coil lead:

RV to can is the only working single-coil lead configuration. The 2 others, albeit programmable, should not be used. With the RV to right atrial coils configuration, no shock would be delivered. Therefore, this vector should never be used with a single-coil lead. When programmed, an alert screen appears that asks for verification that the lead is indeed a double coil.

The selection of the shock pertains to all the shocks delivered by the device. In case of prior unsuccessful shocks in a zone, the last shock of that zone is automatically delivered with the reversed polarity from the preceding shock (initial or reversed)

For a double-coil lead, 6 choices of configurations are therefore available by changing the polarity and the shock vector.

The tilt of the Boston Scientific defibrillators is a non-programmable 80%. The first phase is truncated when the initial leading edge voltage has decreased by 60% (leaving a residual voltage of 100% - 60% = 40%). The second phase is truncated when the leading edge voltage (corresponding to the 40% residual voltage) has decreased by 50% (40/2 = 20%).

The energy delivered is usually about 14% lower than the stored energy. The first two shocks in each ventricular zone can be programmed between 0.1 and 41 J in order to optimize the charge time, the pulse generator’s life expectancy and the safety margins. The energy of the second shock must be the same or higher lower than that of the first. The energy of the remaining shocks in each zone is fixed at a maximum of 41 J.

In the VT zone, the shocks can also be de-programmed, leaving the zone a) as a monitor (no therapy delivered), or b) limited to deliver bursts of ATP.

The maximum number of consecutive shocks that can be delivered in the VF zone is fixed at 8, thereby limiting the risk of an endless series of inappropriate shocks. In the VT zone, the number is limited to 6 and in the VT-1 zone to 5 shocks.

Ventricular shock therapy can be programmed to be non-committed or committed. The objective of a re-confirmation is to not deliver an unnecessary shock in case of spontaneous termination of the arrhythmia. The device monitors the tachyarrhythmias during and immediately after the charge of the capacitors. During that phase, it examines whether the tachyarrhythmia has spontaneously ended, and determines whether a shock is needed.

If the Committed Shock feature is programmed ON, the shock is systematically delivered synchronously with the first sensed R-wave following a 500-ms delay after the capacitors are charged whether the arrhythmia is sustained or not. The 500-ms delay allows a minimum reaction time for a divert command to be issued from the programmer (the operator is able to cancel the shock delivery with the programmer). A forced 135-ms refractory period elapses at the end of the charge, and events occurring during the first 135 ms of the 500-ms delay are ignored. If no R wave is sensed during the 2 sec following the end of the charge, the shock is delivered asynchronously at the end of the 2 sec delay.

If the Committed Shock feature is programmed OFF, at the end of the charge, a reconfirmation phase takes place, when the device determines whether the arrhythmia has ended (no shock delivered) or not (shock delivered) as follows:

A shock is followed by a non-programmable 500-ms refractory period.